Liz Cambage walked off the court in Townsville in 2018 with plans to never play in the WNBL again.

The Australian Opals star and her Melbourne Boomers side had fallen to Townsville Fire in the grand final series, ending a season where Cambage was repeatedly frustrated with her treatment at the hands of opponents, referees and the league itself. She planned to play out her career in Europe or China and the WNBA. Then COVID-19 happened.

And yet here she is, about to run out with title-favourites Southside Flyers in Townsville on Thursday night, discussing a year of political protests, her efforts to keep her Tokyo Olympic dream alive and, on the personal front, how she is considering freezing her eggs to preserve her fertility beyond her basketball career. 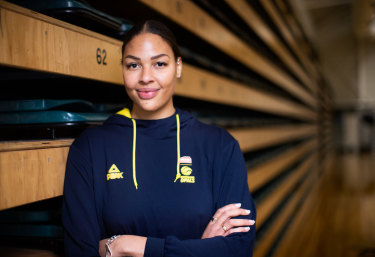 Cambage's last game was in February, ending in tears of joy after helping the Opals qualify for Tokyo. Now she is plotting a second WNBL championship.

"But with the way this year and COVID-19 has unfolded, I have to do everything I can to stay the fittest I can and be mentally and physically at my peak for the Olympics.

"So here I am back and this time with the Flyers.

"It's very frustrating me playing here. I'm continuously told by referees how hard it is to ref me. I don't like having to shrink my game, make my game smaller because other people can't handle it. But I have to push through it this season."

Cambage, 29, does love being around her 'sisters' like Jenna O'Hea and Rebecca Cole with whom she has played with since her teens, that bond has grown tighter while training together during lockdowns.

Cambage never shies away from the big issues. Social justice has been a major issue this year while women's basketball is beginning to talk more about fertility and career-planning for those who dedicate decades to sport.

"I can go into this before you even finish the question," Cambage said when asked about freezing her eggs.

"I am getting older and I don't see kids in my future in the next five years and the earlier you do it, the more 'fresher' the eggs are. Is that the terminology?

"So it is something I've been thinking about and wanting to do.

"I have a lot of lesbian friends or friends who waited until later in life because they were playing sport then struggled to get pregnant.

"So I've been in a lot of circles where women have needed to do it, it's never been a taboo thing in my eyes. I will always try to get pregnant naturally but, god forbid, if I struggled I would love to have a back-up plan."

This year has seen other Australian basketballers join Cambage to speak up about Black Lives Matter and how Australia treats and polices people of colour.

The Opals pushed Basketball Australia to do more and it led to the creation of the Rise Up campaign in which the players take a stand against discrimination and injustices, especially as the league’s players become more diverse.

"I think Rise Up is something the Opals were living, now it's something we have taken public," Cambage said.

"It's frustrating that with COVID-19, we can't get out and get in with the youth but once we can start taking it to our grassroots and our younger generation then I feel like we will be able to push it more."

"I definitely don't have an ivory suit. There is not much white in my wardrobe but I do have some black power suits," Cambage said.

"Just seeing a woman, and then a woman of colour, being the vice-president – it is such an exciting time.

"Times are changing. Growing up and being raised by a single mother who is a CEO and seeing her in those power positions, she has always been an inspiration to me.

"That [Harris as vice-president] is a whole other level of inspiration and belief that you can see yourself anywhere."

Cambage doesn't think people are ready for her to enter politics but she thinks Australians need to take responsibility for who they vote for. 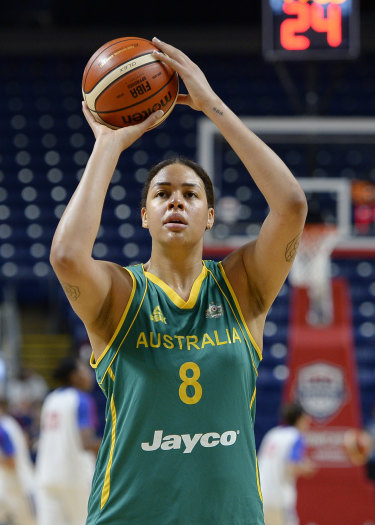 Liz Cambage playing for the Opals in 2016.Credit:AP

"I don't know if I personally see myself there [in politics] but we will see where I am in 20 years time," Cambage said.

"I was a very big Julia Gillard fan. The way she was treated will always anger me and sicken me but she has always been an inspiration and someone I've got to meet a couple of times.

"So maybe one day but I don't think the world is ready for Liz Cambage in politics."

With no WNBA imports, Cambage's signing looms large over the WNBL, as does a stacked Flyers roster which includes Olympians O'Hea, Leilani Mitchell and Rachel Jarry alongside Opals talents Sara Blicavs, Rebecca Cole and Aimie Clydesdale plus a returning Steph Blicavs.

This season will be like none of the 40 campaigns before it with all eight teams in North Queensland playing 14 regular season games each within the next month before a short finals series will decide the title winner on December 20.

"We are kind of a cheat-code this year," Cambage said.

"We do go so deep that when we have back to backs I will probably sit a game out. I will be on limited minutes. Everyone will be looked after and will see the court."

Cambage is a big believer in visualising her goals including this season.

"December 21st? I will be on the flight home, hungover, with the championship trophy in my lap," she said.