UK Sport is changing the way it distributes funds to Olympic and Paralympic sports.

Under the new model, money will be allocated based on medal potential over a 12-year period as opposed to over four years.

On the surface the decision to alter the funding formula may seem strange given how successful, in terms of medals, the system has been.

In 1996, Team GB finished 36th in the Olympic medal table with just 15 medals including one gold. That ranked us below the likes of North Korea, Algeria and Ethiopia.

Something had to change – and it did a year later when National Lottery funding began and completely transformed UK Sport. Athletes, coaches and emerging talents in smaller sports didn’t necessarily feel the same way though – because if you wanted a slice of the lottery funding pie, you had to show your sport had “medal potential” for each new Olympic cycle.

Following GB Hockey’s bronze at London 2012, we enjoyed a seven per cent boost in funding. However, I remember when we came back from the 2014 World Cup having finished 11th out of 12 teams, our performance director was summoned by UK Sport to explain why we had fallen so short of our expectations.

We were aware popular sports such as table tennis and basketball had all funding removed after poor showings in the previous cycle and were worried hockey could soon experience the same fate. The pressure eased when we won the European Championships in 2015, but returned when we came last in the Pre-Olympics Champions Trophy tournament in 2016. It was a rollercoaster of emotions.

Representing your country comes with a great deal of individual and team pressure at the best of times. Add in the belief your performances could be responsible for the future of your sport and that pressure became crippling at times.

Indeed, aside from the gold medal, one of the main sources of joy after our success in Rio was the relief we had secured our sports funding for the next generation of athletes.

As revelations about UK Gymnastics and the ruthless pursuit of success continue to be revealed, the hope is a 12-year approach will not only prove just as successful in medalling terms, but also provide a more rounded system when considering athlete wellbeing.

It was refreshing to hear the funding agencies chief operating officer, Simon Moreton, say one of the priorities of the new funding strategy would be on “how we win” as opposed to the “win or your sport could be toast” feeling I experienced while competing. 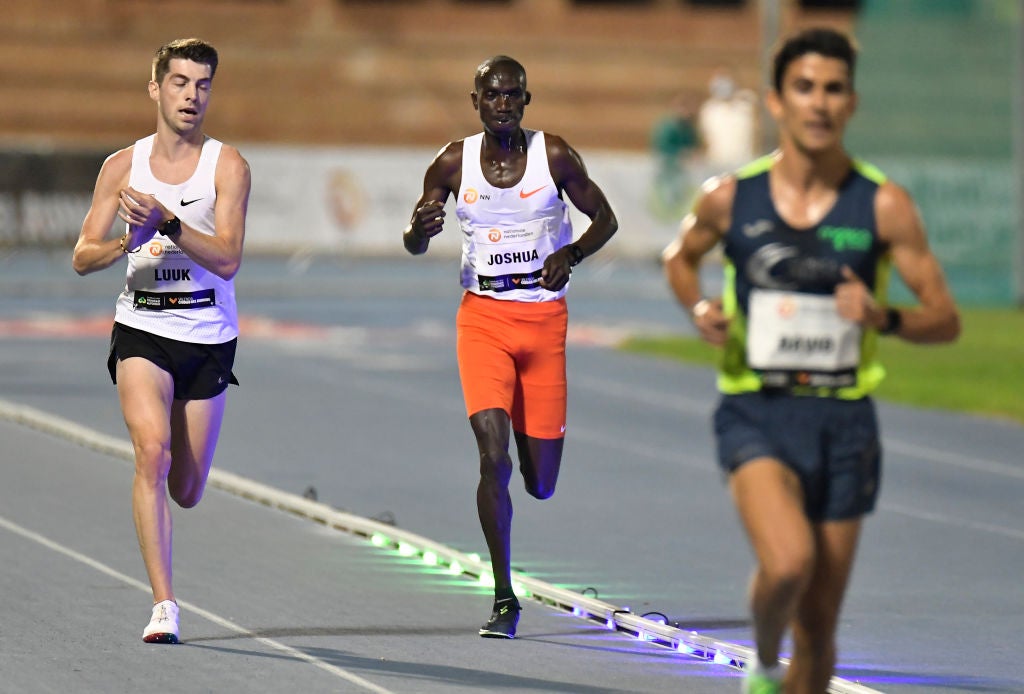 The ghost of Bekele’s 2005 effort then, in the form of neon green lights, failed to escape Cheptegei’s metronome-like rhythm, but now, with Tokyo on the horizon, a debate over technology and fairness lingers.

“The main thing for me is I’m happy with what I wear,” explains Jake Wightman,  a New Balance athlete who ran the second fastest British 1,500m of all time in Monaco two months ago. “I never feel like I’m at a disadvantage because the spikes I wear are as good as I could ask for.

“I believe a spike is a spike, you will get minimal advantages from that. The hard work is done away from what footwear you’re wearing, in training or in the gym.

“So if you go in with the mindset that it’s unfair, you’re already putting yourself at a disadvantage. I think it’s different on the roads, but I don’t think in my events it makes that big of an impact.

“I think it’s bad now that when athletes go out and do something great, people will point to the shoes. Why can’t you celebrate the physical achievement? 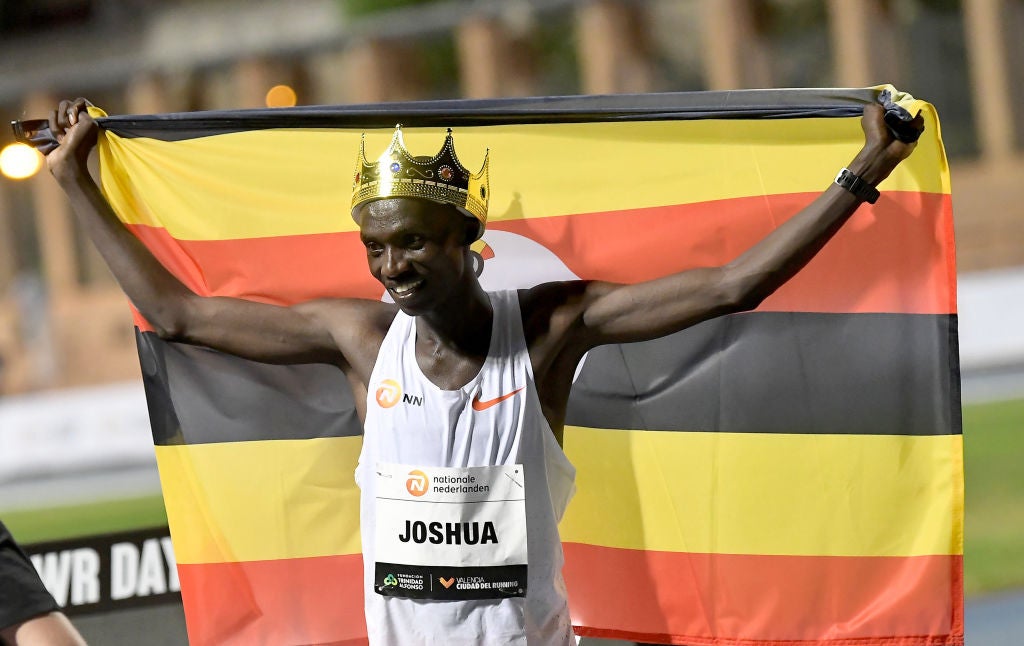 “Even if Cheptegei got a little advantage, he still ran 26-low, it’s still ridiculously quick. We’ll never know what people can run without them now, so you can’t compare. But I don’t see a problem with it. It’s fair to a point, they are just spikes.”

Many may presume Wednesday’s statement performance will prove daunting for Sir Mo Farah, also sponsored by Nike, and his sensational return to the track next year. But with Farah’s 10,000m PB noticeably slower than Cheptegei’s at 26:46, can he still compete at 37 years old?

Wightman, who has ambitions to double up in Tokyo, as Farah has done previously, after also setting a PB in the 800m last month (1:44.18), believes the occasion and presence of the four-time Olympic champion could unsettle the new world record holder.

“Mo won his championships against guys who weren’t of the same calibre as Cheptegei,” Wightman admits. “But every time we see Mo, he’s always ready to win a race.

“I feel that whenever he steps onto the start line he’ll be in good enough shape and Cheptegei, I’m guessing, will feel the presence of Mo. Nobody can doubt the pedigree he has. It’s unknown how good he’ll be on the track.

“It’ll be interesting. What better test for Mo? If he comes back and doesn’t beat Cheptegei then he knows he came out at the right time. But if he wins, then even better, he’s probably be the greatest distance runner of all time. Either way I don’t see a downside to it now and I’d love to see it.”

As many as 45,000 people are still taking part in the rearranged event by running their own 26.2-mile route.

However, Kenya's Kipchoge missed out on a fifth title as Ethiopian Kitata was triumphant in the men's race in a time of 2:05:41, one second ahead of Vincent Kipchumba.

Kipchoge dropped off the pace at the 22-mile mark and crossed the line in eighth place.

Sir Mo Farah was also in the field, but this time acting as a pacemaker for the British athletes. Meanwhile, Brigid Kosgei defied the rain and the gloom to defend her title in the elite women's event.

Kosgei broke for home with seven miles to go leaving Chepngetich, who had looked the stronger in the mid-stages of the race, far behind.

The pair were a minute ahead of their nearest challenger at the halfway mark, and looked on course to trouble the women's-only world record of two hours 17 minutes and one second. But as the rain began to fall harder the pace slowed and Kosgei eventually crossed the line in 2:18.58, almost five minutes outside her world record set in Chicago last year.

"The weather was not good so we struggled," said Kosgei. "I struggled up to the moment I finished.

"We have not prepared well due to the pandemic. I will be prepared for good results next year."

A tiring Chepngetich was caught by a stunning late charge from Hall, who overtook her with just a few strides remaining. There was disappointment for the two big British hopefuls, Lily Partridge and Steph Twell, who both pulled out well before the finish.

The British title instead went to Natasha Cockram, who finished outside the Olympic qualifying mark in 2:33.19, four seconds ahead of Naomi Mitchell.

The race, originally scheduled to be run in April, was adapted to 19.7 laps of St James's Park rather than the traditional street route, and was restricted to elite runners only, due to the coronavirus pandemic.