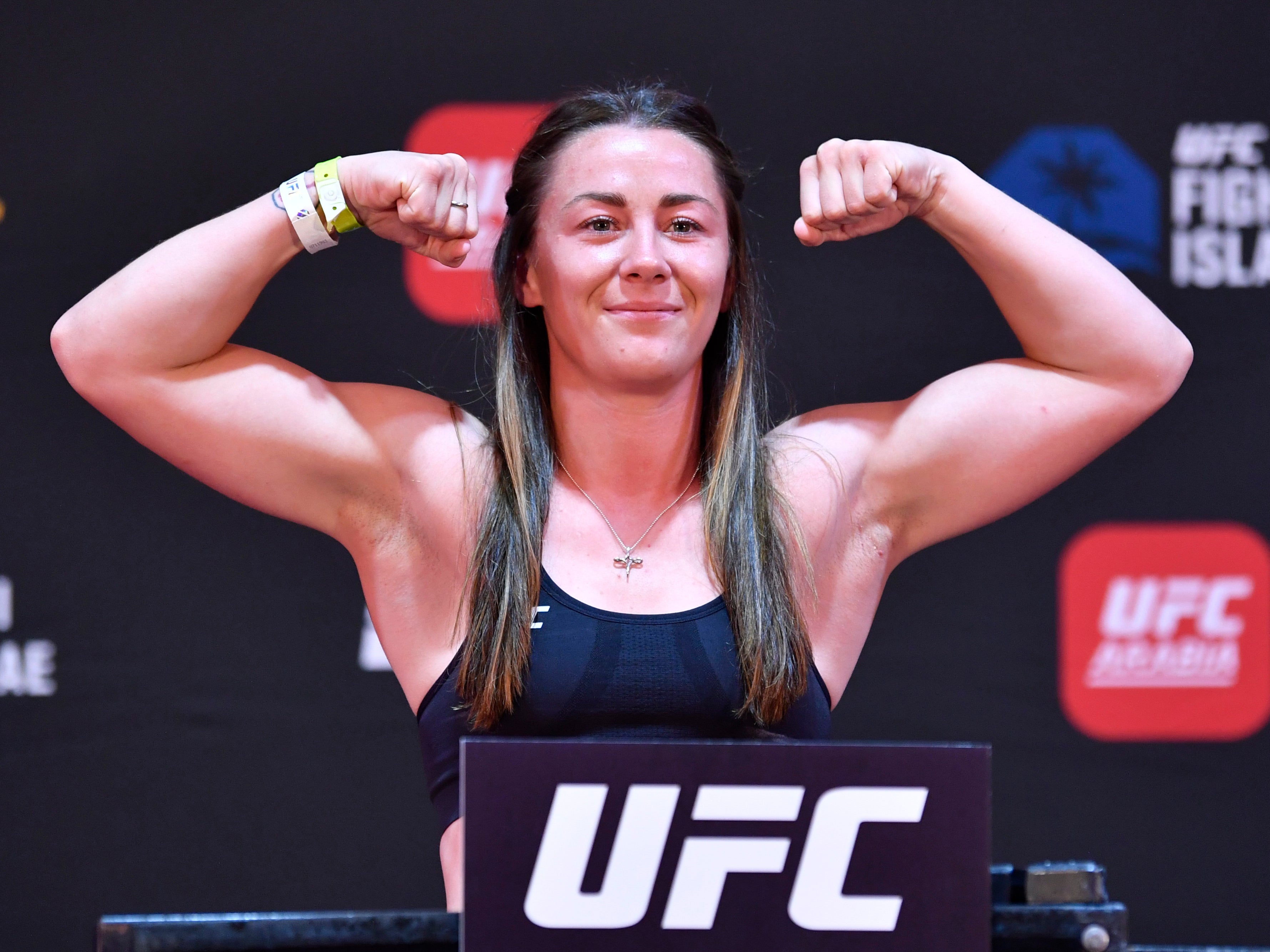 Molly: Maybe that we’re just a little bit more aware of how many fights we’re gonna get a year, or how much space you’ll have in between. Especially with the pandemic, I know that’s hard for the UFC, but maybe if it was just a little bit more clear, because I just wait until my manager Graham [Boylan] is like: “‘Meatball’, 22 July, what are you saying?” And I’m like: “Wherever, whoever, I’m there.” That’s why you always stay ready, though, which is how they like it, to keep you on your toes. I’d like four fights a year – eight-week camps and a month or a couple of weeks in between to recover.

Alex: Fighter pay, whether that means just increasing the amount of money each competitor is paid per bout (surely doable with the company’s revenue in recent years, pandemic aside), or adjusting the restrictive set-up around attire – i.e. the way the promotion’s Reebok deal limits fighters’ opportunities to work with sponsors – or even shifting the balance between base pay and win bonuses for each fight. In the latter case, the fact that circumstances out of your control could be the difference between you doubling your earnings or not seems ludicrous. In various ways, the overall pay structure is not generous enough for fighters right now, especially considering what their job actually entails, and when compared to how boxers are compensated.

Who will be champion in each weight class this time next year?

Women’s flyweight: I think Valentina Shevchenko keeps it against whoever she fights.

Men’s flyweight: I think Cody Garbrandt beats Deiveson Figueiredo, but I don’t know if Cody will be ready, because he’s always injured. But I’ll say Cody.

Men’s featherweight: I’ll say Alexander Volkanovski will still be the champ, because he’s just got that durability and I can’t see anyone finishing him.

Lightweight: Khabib will stay champ, and he’ll keep fighting because Dana White’s got some secret plan for him. He won’t have relinquished it by then.

Middleweight: I don’t know if Darren [Till] will get there in time, so I’ll say Israel Adesanya will stay champ.

Light heavyweight: I reckon Jan Blachowicz will stay champ in that time.

Should the UFC place be stricter with their athletes, in terms of what they can get away with saying?

Alex: This is obviously in light of Colby Covington’s recent comments towards Kamaru Usman after Covington beat Tyron Woodley, and the references he made to “tribes” and “smoke signals”. I know Dana White takes pride in not placing a filter on his fighters, and I do believe that enables their characters to come through so that fans can get to know them better – then decide whether they love or hate them. It can also increase the hype for a fight. But I think what Covington said was incredibly close to ‘the line’, if not overstepping it, and it perhaps marks the point at which White should rebuke a fighter or punish them in some way.

Molly: I used to play professional football, so I had a code of conduct and I knew what the FA [Football Association] would require from us. And then coming to MMA, it’s like a whole different world. You can see the difference between my Instagram and a female footballer’s; mine is who I am – even if I’m drunk on a night out, I’ll put stuff up, whereas they’re not allowed to do that. I feel like fans are able to be more personable with us and relate to us, because we show every aspect of our lives.

And it’s so good that we’re able to be who we are without constraints and restrictions, but when a fighter’s selling a fight, I don’t think you should be able to discriminate against the other person, I don’t think you should be able to make personal attacks. But that’s a human thing, not even a fighting thing; if you’re gonna attack someone’s heritage, you’re a piece of s***. We do sign a code of conduct and ethics, but that has to carry weight through the whole of the UFC.

What’s the next step for women’s MMA to grow even further?

Molly: In America they do a good job of publicising women’s fighting; they put the women on the map, and I don’t think they do that as well in Europe. I’m lucky enough that the media wanna speak to me, but there’s not enough people at the higher level yet in Europe. Maybe we just need a few more elite-level athletes all over, and just giving women more opportunities on the mic. In football now, it’s equal, it’s 50/50. More women are on at 3pm on Sky Sports on a Saturday, if I put the telly on – Fern Whelan, Eni Aluko, Alex Scott. I think we kind of need that in MMA. You have people like Megan Olivi, Karyn Bryant, Laura Sanko, now they’re pushing Angela Hill.

Now we just need to do that across a broad scale, keep the eyes on, and keep doing what we’re doing. The UFC’s been around for about 27 years, and I’m getting paid as much as or more than some of my male counterparts. Our pay packet is equal. The way I’m treated is no different to any male. When I was in Cage Warriors, I think I was treated better than some of the men – and that’s not because I’m a woman, it’s because I was respected for what I brought to the company, and the UFC’s exactly the same. BT Sport is exactly the same with me. We just have to keep on doing what we’re doing.