Ford Tickford Racing driver Cameron Waters will start from pole position for Australia's greatest motor race, the Bathurst 1000, after producing a blistering lap to street the field in the top 10 shootout.

The 25-year-old Mildura-born driver fired his Monster Energy Racing Ford Mustang round the challenging Mount Panorama circuit in 2.03.5592 seconds, not just the fastest time of the weekend but the quickest lap ever recorded in a shootout.

He had almost half a second – 0.4429 to be precise – to spare over the second placed man, Team DJR Penske's Scott McLaughlin, in another Mustang. 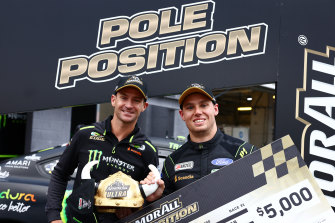 To non-motorsport fans that might sound like a slim margin. To aficionados it is a yawning gulf.

But of course motor racing is never that simple.

A botched start, small error in judgement, braking too late, an unforseen drama at a fuel stop or tyre change, or simply being in the wrong place at the wrong time when someone else has an accident can have catastrophic effects.

Still, Waters and his co-driver Will Davison will grid up in front of the almost deserted stands feeling confident that they can go on with the job, having proved themselves to be fastest through most of the pre-race and qualifying practice sessions during the days leading up to the race itself.

Third fastest and the first Holden man on the grid was Chaz Mostert, who will be joined by another Commodore driver in Nick Percat, who was fourth quickest, on the second row of the grid.

Lee Holdsworth, who stunned his rivals when he went quickest in the whole field qualifying session on Friday evening, could not quite maintain his momentum.

The 37-year-old, who has only been on the Bathurst podium once in his career, was sixth fastest but his flying lap was 1.1173 seconds slower than Waters' record-setting blast round the mountain. 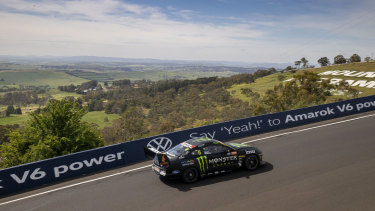 Anton De Pasquale (seventh) and Fabian Coulthard (eighth) will share the fourth row of the grid while James Courtney and Jamie Whincup, two veterans of the category, will line up on row five alongside each other after posting the ninth and 10th fastest times in the shootout.

But the session was all about Waters, who has been consistently quick all season and is hitting form at just the right time.

He won his first individual race this season at Tailem Bend, and now finds himself perfectly positioned to land a maiden Bathurst victory – assuming his car can maintain that pace, and he and Davison make no mistakes.

"Man I'm so pumped, that was absolutely awesome, so much fun," Waters said.

"I made a bit of a mistake at The Dipper but who cares, I had fun doing that!

"I knew the markers I had to hit and just went and did it. I knew we'd go a fair bit quicker than practice and I gave it everything," he told Supercars.com.

"This is so special for all the boys at Tickford, they've worked so hard over this whole period they've been away."

McLaughlin's future lies in the US Indycar Series, but despite the fact that he was some way off Waters' time he is confident he can close the gap in the race itself and go out of Supercars on a high.

"We made a pretty big change in the car, and it gave us direction. I just enjoyed that, and it was a lot of fun. It's a privilege to have time out here by yourself. That was me, but we'll get after that car No. 6 tomorrow," he declared.