Debate will rage forever on which of this century's football dynasties is the greatest. And while I suspect most neutrals wouldn't place Richmond at the top just yet, one thing can already be said for them: they have proven the most adaptable. Richmond's dynasty has conquered the most diverse terrain and overcome the most varied obstacles.

Not because they have won two of their premierships without their generational defender, Alex Rance. Geelong, after all, won their third premiership after losing Gary Ablett Jnr. And not because Richmond have carried significant injuries through much of the last two years. It's easy to forget that Hawthorn's magnificent 2014 premiership year involved such an awful toll that even their coach missed weeks at one point. Not even because the Tigers won a premiership in a pandemic, although that's part of it.

Richmond's unique achievement is to have continued winning premierships when changes to the game mean it shouldn't have. 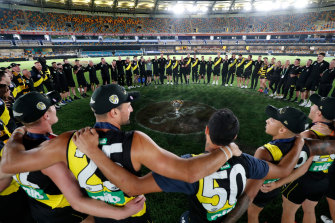 Consider the Tigers of 2017-18. They stormed to premierships major and minor with two chief weapons. First, manic pressure that ground their opponents into submission. Teams would go with them for a time, but Richmond's endurance and running power meant no one else could go the full distance. Every game in their 2017 finals series was the same: a contest for two or three quarters, before a Richmond avalanche delivered a comfortable margin. Collingwood beat them in the 2018 preliminary final by blowing them away early, not by staying with them late. Over this period, Richmond's ability to score heavily late in games, and in "red time" during quarters was the foundation of their success.

Secondly, they built a miserly defence by playing numbers behind the ball. In 2018, for instance, Richmond played seven or eight defenders at the centre bounce more than 80 per cent of the time. They would often lose clearances, but win the ball off half-back and attack from there. They played 6-6-6 only 3.4 per cent of the time – the lowest in the competition. By contrast, Collingwood played a 6-6-6 formation at nearly 65 per cent of their centre bounces.

Then, before 2019, the AFL made 6-6-6 compulsory. Recruiting Tom Lynch helped Richmond use a more traditional structure, but even so, it was a major shake-up.

Initially, Richmond tried to manufacture their old system by playing their wingman at the back corner of the square, but it failed. Eventually they stopped trying to find their way around the new rules, holding their wingmen in place, and found other ways to win the ball off half-back. That meant bringing their small forwards very high, so they would be involved in forward handball chains all the way up the ground.

They won the premiership this way, because the 6-6-6 formation couldn't take away their lethal running power, endurance, and their "red time" dominance.

Their 2019 finals series had much in common with 2017, running all over Brisbane and Geelong in second halves before thrashing GWS in the decider.

Then COVID-19 came along and took "red time" from them, too. Game time reduced by 20 per cent. Breaks between goals and quarters became longer. This was done specifically to make the game less taxing, to allow the AFL to compress the fixture if necessary. It was a perfectly understandable decision, but in a stroke the highest-scoring phase of Richmond's game disappeared. How do you grind teams into exhaustion in a shorter game with longer breaks? It probably even cost Richmond early on. In a full-length game, they might have beaten Collingwood in round two and GWS in round eight.

But perhaps the most dramatic adjustment came on the eve of the finals. Throughout this era, including 2020, Richmond has been a poor clearance side. That doesn't matter so much on a ground as vast as the MCG where limited damage is done directly out of the centre. But this year, Richmond would have to play on either skinny grounds (Adelaide) or short ones (the Gabba), which put a premium on clearances. And they would have to get past Port Adelaide and Geelong, the top two clearance teams in the AFL.

So, Richmond suddenly became the best stoppage team in the league. Their centre clearance differential for this finals series was +30, the biggest for any team in any series on record. And on the last day of the season, they stretched and then broke Geelong, whose suite of brilliant, ageing stars probably had most to benefit from the shortened game.

We've not quite seen this before. Brisbane was a sledgehammer, Hawthorn was a scalpel. Geelong, with its highly kinetic style, I'd call a jackhammer. But this Richmond side is a Swiss Army Knife: smaller, unconventional, unassuming, but brilliantly designed. And only now are we seeing their full array of tools.