McCartin's natural talents are not in question but Koschitzke said the young man had to remember long-term brain issues would hurt his quality of life.

The 24-year-old has been out of the AFL for two years due to concussion and health issues. McCartin recently told media he was training and considering a comeback after being cleared to resume football in November last year. 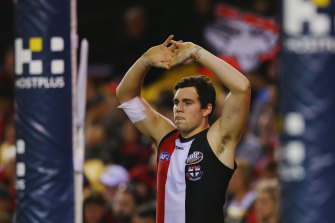 "It's a tough one as I'm not privy to what is going on with him and the medical side of things and advice he is getting,” Koschitzke told SEN 1116 on Friday.

"Brain injuries can be terrible in later life and I'm experiencing that first hand. I would really encourage him to make a really intelligent decision and not go on."

Koschitzke was on the Gold Coast Suns coaching staff earlier this year before being let go in the cull of coaching roles across the AFL following COVID-19.

He is now on his family farm helping his brother prepare for a bumper harvest but admitted he is closely watching his own brain issues following several jarring concussions in his 200-game AFL career.

"I've got really bad memory loss and bad mood swings and down times. I have no doubt it's from the concussions," Koschitzke said.

"I certainty feel after the hit in 2006 I changed as a person. I really reckon it affected my personality.

"I have to really watch myself, be careful of what I'm doing and work on myself. No doubt it has had a big impact.

"This is what Paddy should be looking at. He might feel fresh and fine now, but it's the long-term impacts. You look at guys who had some big knocks in their 40s and 50s, I'm certainly concerned about that with the older I get."

Koschitzke said he hoped to return to an AFL role, possibly with the Saints, once Melbourne opens up again and he also put forward a strong endorsement for former Saints and Fremantle coach Ross Lyon, should he push for a return to coaching.

"I love him. Sometimes he can be a polarising person but he would wind us up so we could run through brick walls," Koschitzke said.

"He was just so passionate and loyal to his players. The boys still speak regularly and go out to eat. I reckon he is the funniest man in the media, he's a brilliant coach, a very good motivator and I'd love to see him get another gig."

AFL head of football Steve Hocking added: "We have strengthened match day protocols for the identification and management of concussion, we continue to change the laws of the game to discourage high contact and also moved earlier this season to change the tribunal rules, to more strictly sanction tackles that endanger the head."

Get your finals’ fix delivered straight to your inbox with our Real Footy newsletter. We’ll have a preview of the matches and expert tips each Friday afternoon and on Mondays, chief AFL writer Jake Niall will wrap up the weekend’s play. Sign up to The Age‘s newsletter here, The Sydney Morning Herald‘s here, WAtoday‘s here, and Brisbane Times‘ here.