Whether it was leading Scotland, answering the Lions call or even mixing with royalty, Andy Nicol has never let fear hold him back

The top of the Sydney Harbour Bridge and the ground zero of Murrayfield lie a world apart but they link the life of Andy Nicol. They testify in snapshots to how life can be tackled head-on and how moments must not only be seized but cherished.

The 49-year-old has lived a life marked with conspicuous success in sport and business, but two incidents illustrate that he is not immune to the mundane encounter with fear and the more edifying feeling of overcoming it. ‘You have to be comfortable with being uncomfortable,’ he says. ‘I have been good at that.’

On July 13, 2001, as the clock inched towards midnight, Nicol was leading a tour of British and Irish Lions supporters in Australia. He was standing on the Sydney Harbour Bridge. Hours later, he was sitting on the bench for the Lions. 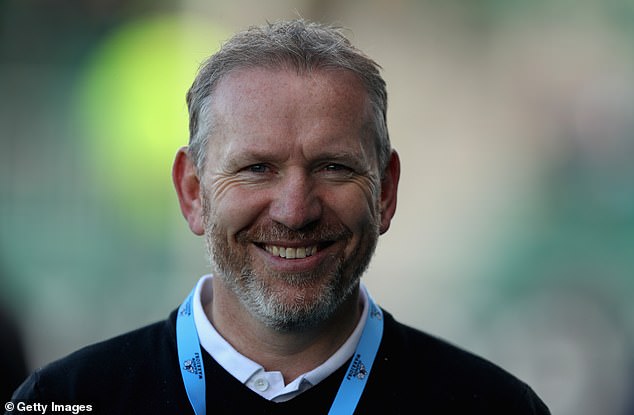 ‘I wanted to be part of that tour in some way,’ he says. ‘I genuinely felt I had the chance to go as a player but when I wasn’t picked, I didn’t want to ignore it. I wanted to experience it.’

He received a call as he took the tourists to the bridge. Injuries had led the Lions coaches to request the Scottish scrum-half be a replacement. Nicol’s reply was revealing.

‘I said I was delighted and would report in the morning but, in the meantime, I was going to climb the bridge,’ he says.

There was fear, but it was met. ‘I was absolutely petrified,’ he says of sitting on the bench, within touching distance of a Lions test.

‘It could have ended my career. If Matt Dawson had gone off after five minutes and I had gone on I reckon I would have been taken off after 30 minutes. I had been on the p*** for 20 days. In international rugby, you can’t survive unless you are at peak fitness and I was anything but. It’s a great story but at the time it wasn’t that enjoyable an experience.’

The same feeling of dread overcome by a fixture of self-will and experience is relayed when he speaks about his Scotland career. 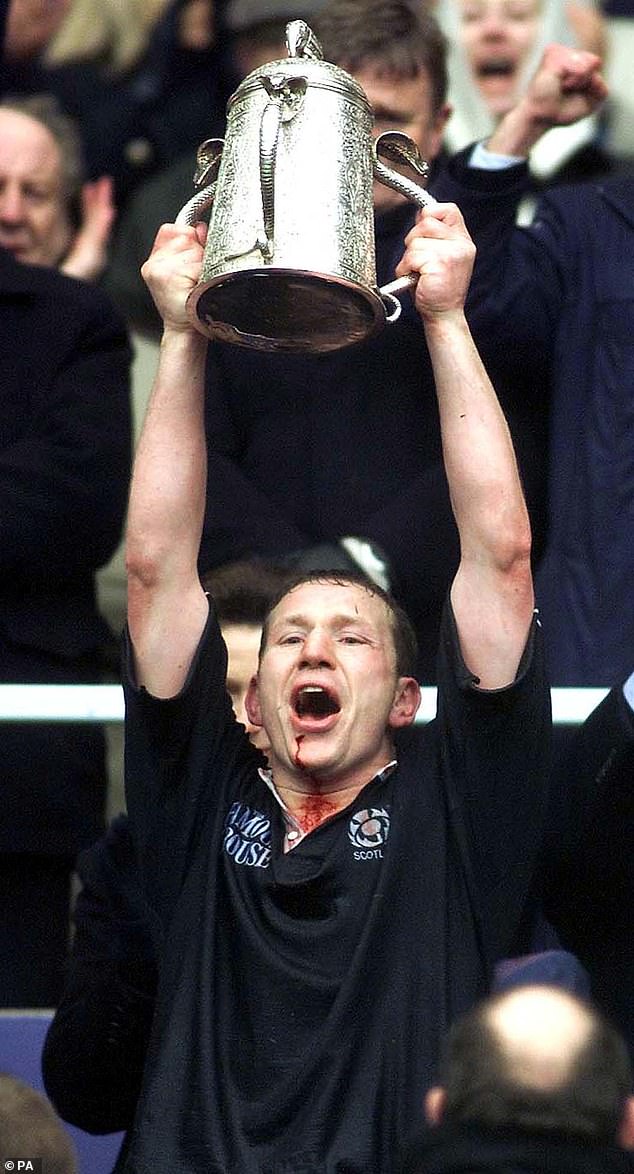 ‘When you are at Murrayfield, five minutes before playing England or the All Blacks, the self-doubt is there. That moment is genuinely a horrible experience,’ he says.

‘You want to be anywhere else in the world. Then the door opens, you turn right and run out, and suddenly all that stress leaves you and there is no other place you would rather be.’

He made his Scotland debut on January 18, 1992, against England. ‘I was scared of David Sole,’ he reveals. ‘I had been on the terracing when he walked out for that grand slam game. Two years later, I am sharing a room with him in Dalmahoy and ready to make my first cap. It was terrifying.’

It was also wonderfully sentimental. If the first snapshot is of a renowned harbour from a spectacular bridge, the second illustrates what is significant to Nicol, then and now.

‘I have strong memories of Murrayfield,’ he says. ‘I am regularly asked in interviews what I would take from my house if it was on fire. One item is the obvious choice.’

In 1932, Nicol’s grandfather, George Ritchie, played against England at Twickenham. He was photographed meeting the Duke of York, subsequently King George VI. In 1992, Nicol approached a photographer before the match with England and showed him the picture of his grandfather with the king. ‘I wanted a replica, the exact same angle, when Princess Anne was meeting me,’ he says. The mission was accomplished. 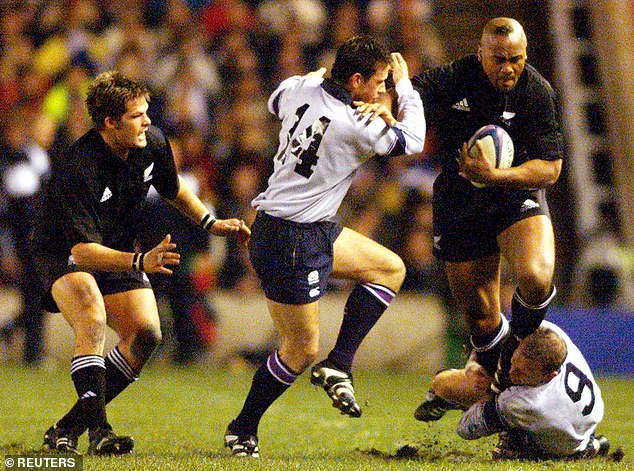 Both grandfather and grandson earned their caps playing with Dundee HSFP when it was difficult to force one’s way into a national squad if one was operating north of the Forth. How did Nicol achieve it at the callow age of just 20?

There was talent, of course. But there was something that has accompanied him beyond rugby.

‘I was always one for asking questions,’ he says. ‘If I had to look back on my career and add what I know now – and there are no regrets – I would ask even more questions, be more challenging, push myself out even more.

‘I was a young buck coming through at a young age. The team was full of genuine greats: David (Sole), Gavin and Scott (Hastings), Derek White, Finn (Calder), JJ (John Jeffrey).

‘At first, I just put my head down and absorbed it all but Geech (Ian McGeechan, coach) told me: “You have to be a leader at scrum-half. You have to communicate to Sole and the others.

‘You have to tell them what you are doing and what you want them to do”.’ He embraced this philosophy. In Sydney, in the dressing room at Murrayfield, on rugby pitches all over the world, in Heineken finals and in training sessions, he always chose the route that involved a step beyond the comfort zone.

‘I was very lucky. But I put myself in the right place to be lucky,’ he says. ‘When I was in Sydney, I was always going to say yes to the Lions. The coaches knew that, too. That’s why they went with me. Physically, they knew it might be a problem but not mentally. I do my best work when I am under pressure. You only get that confidence by experiencing that fear, that adrenaline rush, and doing what initially makes you feel uncomfortable.’ 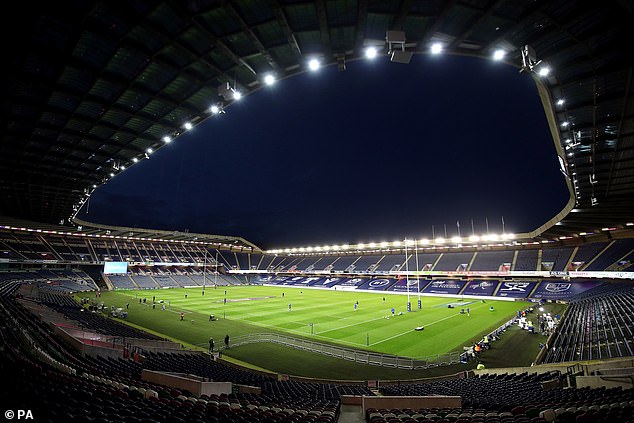 His day job is simple, yet profound. ‘Our mission is to change people’s lives. That sounds grandiose but that is what it is about when you break it down to base levels,’ he says, of his position as chief executive of ABSTRACT, a people development business.

‘If someone does something different as part of our programmes, then we have changed their lives. It is great to touch base with people a year down the line and see how they have worked on confidence, resilience, self-awareness and as a result they have achieved a promotion they never thought they would get. That’s when it’s all worthwhile. You are serving them but, indirectly, they are serving you because that gives you a nice glow.’

Nicol, of course, is aware of the moments that changed his life, too. He was the first Briton to lift the European Champions Cup, then the Heineken, in 1998. He was also the first captain to lift the Calcutta Cup at Murrayfield, in 2000, as presentations were normally made at a hotel after the match.

But the biggest decision came in 1994. ‘Bath was the making of me,’ he says of signing with the English giants. ‘I was a big fish in a small pond up here and I wanted to test myself. I had made it known on tours that I wanted to move on and word got round. Gloucester were interested and I had basically decided to phone them at 7pm to accept. Then Brian Ashton phoned at six.. I said yes immediately. They were a dominant team, with 22 internationalists. I loved it.’

Ashton joins McGeechan at the very top of his list of great coaches. ‘They were the best I played for, though Sandy Hutchison at High School of Dundee and DHSFP was a huge influence. Geech and Brian didn’t overcoach. It was about having good players and then empowering them to do their stuff,’ he says.

‘At Bath, it was all about decision-making in practices. When your body has done it and your mind has done it, it is easier to replicate it on the field.

‘They were outstanding at giving players responsibility. There is a lot of overcoaching in pro rugby and every coach seems to feel they need their five minutes of fame. Players might do something on the pitch now simply because they have been told to but Geech and Brian were never like that.

‘Decision-making is an intangible. It is hard to explain because it is not a formula. You have to see what is in front of you and process your options quickly. With others on the same wavelength, with that alignment, you can do great things.’ 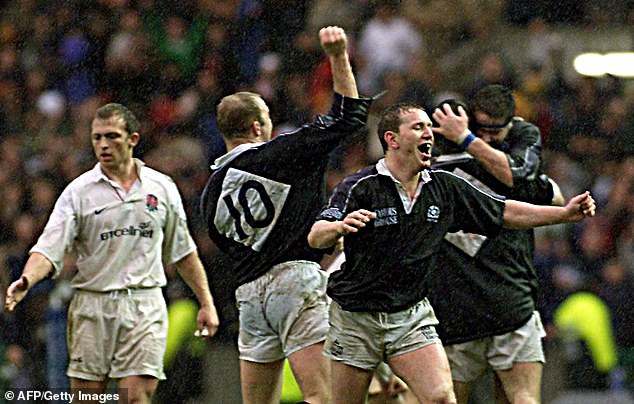 He made his Scotland debut on January 18, 1992 and would go on two Lions tours too

He worked with the Royal Bank of Scotland for seven years before taking the job at ABSTRACT. His career as a pundit – and, indeed, a Sportsmail columnist – conformed to the Nicol philosophy of being in the right place to give him the right opportunity. And then saying: “Yes.”

‘The big moment was when I went to the World Cup in 2003 to work on radio with the BBC,’ he says.

‘I thought it was a fantastic opportunity but they did not fly me out or pay for my hotels. They were basically booking me for five games. I covered my expenses.’

During the last week of his work, a BBC executive approached to book him for the 2004 Six Nations coverage. ‘I have done every season since,’ he says.

‘One of the big attractions was that I had gone to Australia on my own back.. The executive said I had seen the opportunity and gone for it rather than sit back and wait for the tap on the shoulder. I was proactive. I didn’t hang around waiting for something to happen.’

This attitude links the worlds of Sydney and Murrayfield, sport and business. Nicol is highly aware of the transferable skills that bind commerce to the demanding reality of pro sport.

The biggest lesson for him is that, while experience matters greatly, there must be room for young voices.

‘There can be too much emphasis on a hierarchy,’ he says. ‘There should be room for everyone to have a say and the young employee can have more knowledge in certain areas than the chief executive, say in operating social media or whatever.’

This philosophy has run through the mind, words and experience of a 20-year-old internationalist, the tyro 30-year-old media analyst and the businessman approaching his half-century. There are, of course, the snapshots of Sydney and Murrayfield to keep him company. But there is the bigger picture.

‘You have to push yourself as much as you can in an authentic way,’ he says.

It is more than a mantra. It is a way of life whether in the dressing-room, the green room or the boardroom.