The AFL coaching fraternity has rallied around Rhyce Shaw, who has taken extended leave after a difficult year in charge of North Melbourne.

Shaw, 38, will not be involved in the club's trade and draft period and may not return to the club despite having a year to run on his contract.

The Kangaroos have been making contingency plans should he not return but the immediate concern is for Shaw's health. 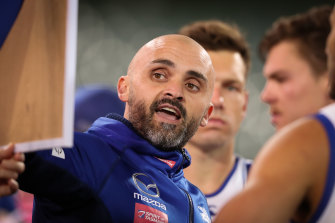 "It's a sad state. Rhyce is obviously a person that we know, we cherish. He is an incredible person but the rigours of our game, especially this year, it probably reciprocates what people are going through," he said.

"It's tough, it's challenging. We wish him a speedy recovery. The North Melbourne Football Club, people like Rhyce Shaw, don't grow on trees. He is a special human. He has an incredible relationship with his players – we just wish he bounces back very quickly because people like him are great to have in the industry."

Shaw, who replaced Brad Scott as interim coach midway through last year and, as the full-time boss, felt the Kangaroos were a legitimate finals contender this year, presided over a bruising season.

The Roos finished in 17th spot with a 3-14 record, as concerns mounted about Shaw's health late in the season while appearing downbeat in his weekly and post-match press conferences. The pressure of a struggling campaign was exacerbated by being on the road in hub life.

"The most important thing right now is that Rhyce looks after himself and his family. He will do that. I know through his management that he will be looked after really well," Hinkley said.

"Everyone will be here when he needs it. It's tough when anyone has anything personal to deal with."

AFL Coaches Association chief Mark Brayshaw said on Saturday he had yet to be in direct contact with Shaw but the association would do all it can to help him.

Collingwood great Tony Shaw – Rhyce's uncle – said his nephew had spent time at a health resort once the season finished, coming after "hub life had got to him a little bit".

"Ray [Shaw's father] said he's seeing his son. He said physically he's getting himself together. What that means – I don't think this is a good sign – because if I knew anything about it and it was going to mean the detriment to the health of Rhyce, I'd lie to you," Tony Shaw said on 3AW.

"There's no doubt, I wouldn't be telling the truth here now. But I don't [know the truth]. Everything was that he went away after the end of the year, I think the hub really got to him a little bit. And I think it got to everyone, really, because he wasn't playing finals, you were still around football.

"He went away for a week up north [in] Queensland, and I was told it was a health resort or something like that. Then came back to Melbourne, been back to Melbourne for three weeks now. And is just going about how it is. I see that and I'm not happy about it, but that's all I can tell you."

Former Melbourne and Sydney coach Paul Roos has been contacted by the Kangaroos about taking a leadership and mentoring role with Shaw and could help find a new coach.

In a statement, Kangaroos chairman Ben Buckley said the club was unable to shed light on Shaw's future at this point.

"We have been acutely aware of speculation regarding our head coach, but we have not been in a position to say anything as we are respecting the wishes of Rhyce and his family. Rhyce has asked for some time and space away from football and we have provided him support during this period," he said.