World Cup-winning Wallabies captain Nick Farr-Jones says it would be “too risky” for the national team to take a knee in support of the Black Lives Matter movement because viewers would switch off.

At the launch of the Wallabies First Nations jersey in Sydney on Wednesday, senior player Dane Haylett-Petty was asked by a reporter whether Australia has as a group discussed taking a knee in support of the movement against racially-motivated violence, which spread across world sport following the death of George Floyd in police custody. 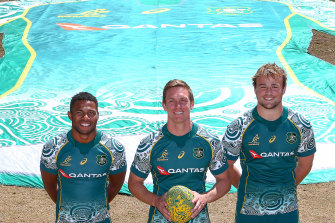 Filipo Daugunu, Dane Haylett-Petty and Harry Wilson at the unveiling of the Wallabies’ Indigenous jersey on Wednesday.Credit:Getty

"To take the risk of basically splitting the support the Wallabies are starting to earn through their gutsy performances in Wellington and Auckland – just don’t do it guys, it’s too risky," Farr-Jones said.

"You run the risk that a few [viewers] would just turn off. They don't want to see politics in national sport. That's a real risk. 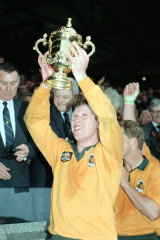 Nick Farr-Jones celebrates with the Webb Ellis Cup at Twickenham in 1991.Credit:Getty

"I think it could be divisive."

Farr-Jones doesn’t believe there is a big problem in relation to the treatment of Indigenous Australians and revealed the Wallabies observed a minute's silence on a tour to South Africa when he was playing.

"I don't think here in Australia that we have a major issue in relation to discrimination of coloured people," Farr-Jones said. "We went to South Africa in ’92 when it was opening up, when apartheid was just about behind it. Of course [Nelson] Mandela was elected the first black president in ’94.

"We had a minute silence for victims of township violence before we played our Test match in Cape Town but here in Australia I think if you surveyed your listeners, I think 99 per cent would agree that all lives matter. We don't have that issue. Let's not make it a political issue in a sporting event."

The 63-Test Wallaby, who led Australia to World Cup glory in 1991, said all stakeholders would have to be consulted if the Wallabies team decided to take a knee during the national anthem.

"At the end of the day it's up to the captain, the coach [and] the team but I would also implore the guys to make sure that if they want to do it, they get the approval of the board," Farr-Jones said. "They can't just go and do this and risk the loss of all the support.

"Over the decades we cherish the fact we've had some amazing Indigenous people in our teams, some amazing Polynesians and Fijian players. I think of the Ellas and how blessed I was to play alongside Mark in my early Tests… we've never had an issue. We all come together under that one jersey brilliantly."

Indigenous leader Warren Mundine also felt it would be an unwise move.

"I think it's a stupid idea quite frankly," Mundine said on 2GB. "People are getting a bit sick and tired of sportspeople, people on huge salaries, telling us how we should be acting.

"I think it's great they’re going to wear the Indigenous colours … but this is a blatant political movement."

Tags: do, Don't, Farr, guys':, it, just
You may also like:
Recent Posts
This website uses cookies to improve your user experience and to provide you with advertisements that are relevant to your interests. By continuing to browse the site you are agreeing to our use of cookies.Ok