Lifted significantly with a new title beside his name, working expertly with Cleary and laying on tries when he wasn't scoring them. Electric performance central to victory.

Effectively an extra forward with a quintessential modern-day winger's role out of his own half. Ran for more than 150m in first half alone. Capped night with a try. 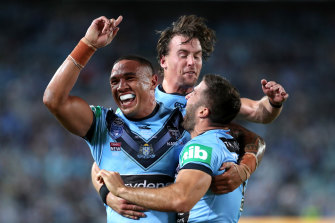 James Tedesco was superb for NSW and scored a try.Credit:Getty

Didn’t look completely the part again as Origin centre, stood up once again by Capewell although by then was without consequence.

Poor read against Gagai conceded early try and led to more talk about playing out of position at centre but bounced back to exact revenge on opposite number with four-pointer.

As good without the ball as he was with it, with kick-chases crucial to NSW getting on top and staying there. As usual, got over the line as well – twice.

Roving both sides of field, pirouetted across to settle Blues nerves with first try, and then began setting them up. Much-needed extra spark at five-eighth.

This was the guy who steered Penrith to a minor premiership and grand final, standing up superbly with the series on the line and under extreme pressure personally. Kicked brilliantly. 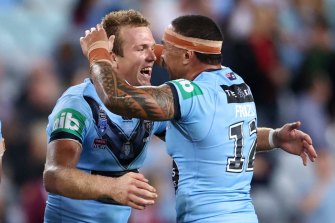 Tyson Frizell and Jake Trbojevic celebrate at the final whistle.Credit:Getty

Force to be reckoned with in defence, as Coates discovered most notably in hit of the night. Variation at first receiver another highlight of superb outing.

Showed what NSW were missing in Origin I, straightening up attack when thrust into action after 25 minutes. Belongs on this stage.

Not the kind of fresh legs you want to see running at you when you’re pinned in your own territory and out of gas. Strong bench showing.

Flattened Friend with first run at Origin level and triggered all-in with niggle. There for a good time not a long time.

On debut, another handful for Queensland to worry about as a reinforcement, for sheer size as much as anything. Will be back. 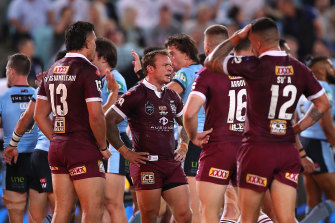 The Maroons were outplayed all over the park.Credit:Getty

Easily Queensland's most dangerous back with ball in hand. A good return to the top level after missing last week's win due to suspension.

Absurd finish to put Maroons on the board. He was vertical when he grounded the ball. Belongs at Origin level.

Missed Walker in the lead up to NSW's first try and was part of the Maroons' left edge which was diabolical in defence.

Set up Coates for the first try of the night but missed a bad tackle on Wighton and struggled to have a significant impact in attack.

Struggled big time on both sides of the ball. Another member of the left edge that NSW peppered all night.

Head hit the ground in just the second minute while collecting a kick and was taken from the field for an HIA. Did not return.

Cracking cutout pass to Gagai, who put Coates in for the first try of the night. Kicking game stood up. Also put Papalii in.

Provided punch in his debut Origin stint but only finished with 48 metres from his seven runs. Not a great night. 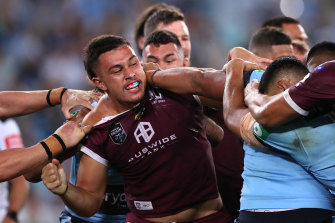 A defensive workhorse once more. Didn't have a great deal of go-forward to work with coming out of dummy half.

Scored Queensland's second try but failed to dominate the middle third in attack like he often does for both the Raiders and his state.

Gave away two ill-disciplined first half penalties – one of which allowed NSW off the hook and saw Cody Walker score. Queensland never regained momentum.

Queensland's most dangerous forward with ball in hand but missed four tackles and made a couple of bad errors.

Fell off a couple of critical tackles in the first half and was sent to the sin bin for punching Payne Haas in the second half.

Kicking game was good but was part of the Queensland left edge that leaked points like a sieve. Not a good night. Looked lost in attack.

One of few Queenslanders to put in a big shift in attack but made a critical error in the lead up to Josh Addo-Carr's try.

Has to be given a start in Wayne Bennett's inevitable shake up of this team. Should be playing more minutes than he's currently afforded.

Only made 25 metres with ball in hand. Didn't mirror the impact he's had for the Titans all season.