The contentious pre-finals bye is again in the spotlight after both qualifying final winners missed out on making it through to the grand final.

Port Adelaide and the Brisbane Lions both prevailed in the first week of the finals but were beaten on their respective home decks in the preliminary finals by Richmond and Geelong respectively.

The Power and Lions had finished top two on the ladder, but because of the pre-finals bye – implemented at the end of 2015 and retained for this COVID-19-affected season – played just one match for the best part of four weeks before their preliminary finals. 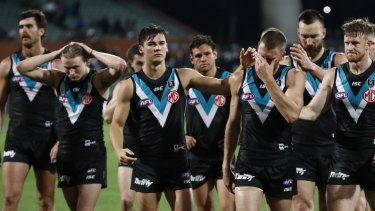 Between 2007 and 2015, 17 of 18 qualifying final winners had gone on to win their preliminary final a fortnight later. The week off was widely viewed as advantageous. However having multiple weeks off, coupled with the fact that every finalist now gets a weekend off before the finals, appears to have diminished that advantage.

Since the implementation of the pre-finals bye – which came about after North Melbourne and Fremantle rested players en masse in the final round of 2015 – only four qualifying final winners have qualified for the grand final. They are: Richmond and Adelaide (2017), West Coast (2018) and Richmond (2019). Conversely six qualifying final winners have lost a fortnight later in the preliminary final: Geelong and Greater Western Sydney (2016), Richmond (2018), Collingwood (2019) and Port and Brisbane (2020).

Lions coach Chris Fagan said it was an issue worth exploring.

“That thought went through my mind because we’ve only played 17 games this year and because they’re reduced time, it’s probably only the equivalent of playing 12 or 13 games coming into the finals series.

“We’ve seen preliminary finals in past years where the team that won the first week and had the rest would overrun teams late.

“Maybe that has an effect. It’s not an excuse for us losing, we were comprehensively beaten. But I’m not sure it was an advantage to lose that first week – but we’ll take the win, we wanted to win a final and get that invaluable experience.

“It’s an interesting question. Maybe a scientist could answer it better than I, but I wondered about that.”

“I would be surprised if it happens again next year because I don’t think it benefits the teams that win in that first week,” Richardson said.

“You have worked so hard in that year to get the double chance. You win, go through to a prelim and you only play one game in a month. It is clear tonight the two teams that are supposed to get the benefit in Brisbane and Port Adelaide didn’t really get that.”

AFL fixture boss Travis Auld declined to comment about the matter when contacted on Sunday.

When unveiling the round 18 fixture earlier in the year, Auld said the bye had been maintained to "optimise the scheduling of round 18 as well as giving teams who make the 2020 Toyota AFL Finals Series extra time to recover."