Geelong had long been considered frontrunners for the midfielder's services, while Port Adelaide had also shown interest, but the Power have officially dropped out of the race and the Saints are closing in on securing the 2019 Crows best and fairest. 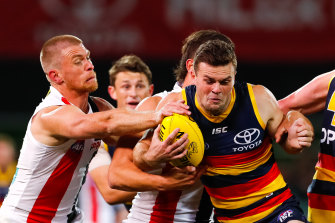 Crouch, 26, had been chasing a long-term contract, however interest in him had only been lukewarm following another injury-interrupted season which finished in ignominious fashion when he was suspended for two matches after being caught in possession of illegal drugs.

Adelaide will have the option to match an offer for Crouch given his restricted free agent status.

It is unclear what the likely acquisition of Crouch means for St Kilda's pursuit of Greater Western Sydney midfielder Jye Caldwell, who has also been in the sights of Essendon.

The Saints are increasingly a destination club, having landed five players during a hectic trade period last season.

St Kilda coach Brett Ratten said after the Saints' finals campaign ended that the club was in the market for another midfielder.

Get your finals’ fix delivered straight to your inbox with our Real Footy newsletter. We’ll have a preview of the matches and expert tips each Friday afternoon and on Mondays, chief AFL writer Jake Niall will wrap up the weekend’s play. Sign up to The Age‘s newsletter here, The Sydney Morning Herald‘s here, WAtoday‘s here, and Brisbane Times‘ here.