1. Dave Rennie did what we knew he would: The Wallabies did what Dave Rennie sides do: they were purposeful, aggressive with their carries, fit, skilful and organised. Forget about those last hectic minutes: the Wallabies were the better side and should have won. Of course, there is a backlash coming. Of course, the All Blacks will be better at Eden Park next week. But Rennie will probably tinker with his line-up and add a few more elements too. Allow yourselves to feel good, Wallabies fans, because there is more to come. 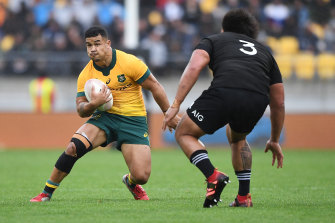 Hunter Paisami was sensational on debut for the Wallabies in Wellington.Credit:Getty

3. The new boys were excellent: Filipo Daugunu was simply outstanding on the right wing, slipping past tackles at will and picking up a well deserved try. When both of your wingers score tries in filthy Wellington conditions, you know that they've had a good day and the attack had some good shape. Hunter Paisami was also strong, but the Reds connection of big Harry Wilson and Daugunu down the right side caused the All Blacks some genuine problems. It was a good day for the debutants, and a good one for the 'old boys' Nic White, Matt To'omua and Michael Hooper.

4. The lineout: So, to the downsides. Hooker Folau Fainga'a struggled with his throws and it was enormously costly. Three went astray and in a game of such fine margins that is too many. There might be calls for the Wallabies to go for a taller back row, but they would be wrong. Pete Samu is one of the most athletic leapers in the country, which is why the Wallabies used Wilson as a midfield carrier from some lineouts. 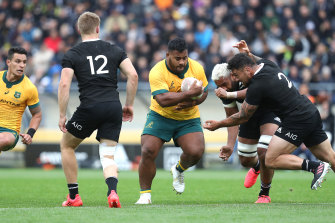 Taniela Tupou found himself in the playmaker’s role too often for it to be a coincidence.Credit:Getty

The problem starts at No.2, and it is something we saw for most of Super Rugby AU. Yet, although they lost a number of lineouts, it didn't seem to affect Matt Philip and Lukhan Salakaia-Loto around the paddock. The two big men put in proper shifts, getting the Wallabies some front-foot ball and raising questions about the steel in the All Blacks' pack.

5. Taniela Tupou's new role: The Wallabies seem to have found a new role for the big man with the delicate skills – the world's biggest No. 10. Tupou popped up in that position far too many times for it to be accidental, and he invariably made a good decision to carry or pass. He fully justified his selection ahead of Allan Alaalatoa and was the game's best player in the opening quarter. It was great to see such innovative thinking around how to use him, because he can throw a left-to-right pass with ease or simply bash his way over the gain line. His year of growth continues, while Alaalatoa reacted to his demotion by injecting some real energy off the bench.

Team of the Week