NRL veteran Michael Gordon has been dropped from his role as specialist coach for the Titans after being charged with drug offences overnight.

Gordon was arrested by police, along with six other people, following a six-month investigation into the alleged supply of MDMA and cocaine on the NSW-Queensland border.

The Titans said in a statement they have been made aware of Gordon's arrest. 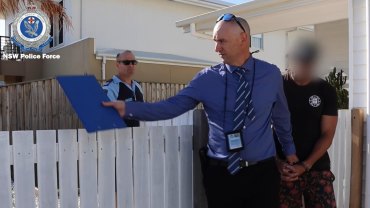 Michael Gordon is arrested at a home in Casuarina. Credit:NSW Police

"Michael has been working on a contract basis, providing specialist coaching services to the Club over the past season," the statement read.

"He will not be providing services to the club until further notice.

"The Club will make no further comment as the issue is now with police."

Police allege in May this year, detectives established a Strike Force to investigate the distribution of illicit drugs in areas on the NSW Far North Coast and south-east Queensland.

During the searches, investigators seized cocaine, MDMA, steroids, more than $60,000 cash, mobile phones and drug paraphernalia. Six men and one woman were arrested during the operation with further arrests expected.

Tweed and Byron Police District Crime Manager Detective Chief Inspector Brendon Cullen said the drugs could have ended up in the hands of young school leavers.

“Byron Bay is one of the busiest places on the east coast of Australia right now, with thousands of schoolies expected to fill coastal towns during the coming weeks,” he said. 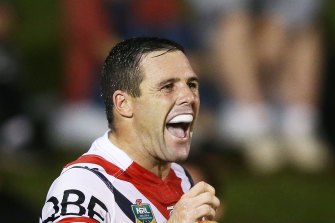 Michael Gordon scores a try for the Roosters in 2017. Credit:Getty

“These drugs were bound for our streets, and these arrests will have significantly disrupted the supply chain into the schoolies areas."

Cullen said police will allege the syndicate was operating across the border.

"We are extremely pleased to be able to put these people before the courts," he said.

Gordon had stints at the Panthers, Cronulla, Parramatta, the Roosters and the Titans. He also represented NSW in State of Origin in 2010.