Report and highlights from the Championship clash between Birmingham and Bournemouth at St Andrew’s as Arnaut Danjuma struck for the Cherries and David Brooks added two more. Scott Hogan scored a late consolation for the Blues.

Bournemouth returned to winning ways with a deserved 3-1 victory away to Birmingham to move up to fourth in the Sky Bet Championship table.

A goal from Arnaut Danjuma after nine minutes and a David Brooks brace either side of half-time put the Cherries in the driving seat as they bounced back from the 1-0 defeat at Sheffield Wednesday, their first league loss of the season.

Scott Hogan pulled one back for Blues after 55 minutes, but it proved no more than consolation.

Bournemouth, who won 8-0 on their last trip to St Andrew’s in 2014, controlled the game for long spells and could have scored more, with Mikel San Jose clearing one effort off the line and Neil Etheridge making four saves. 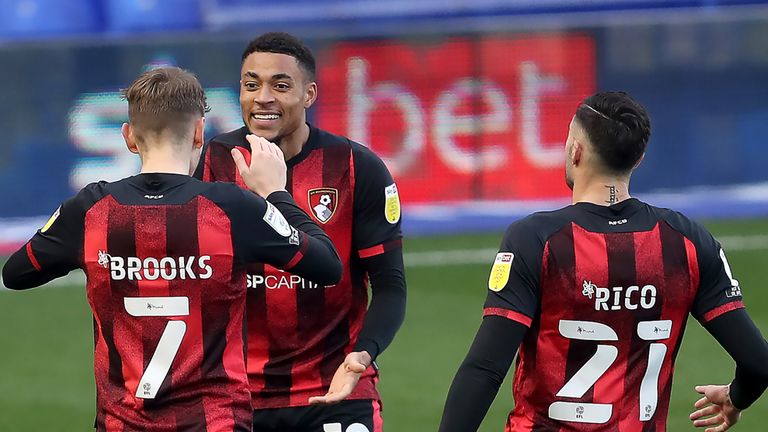 Defeat for Birmingham was their second in a week and fourth in seven games this term.

The only downside for Bournemouth was an injury to midfielder Lewis Cook, who was forced off in the 38th minute after a 50-50 challenge with Gary Gardner.

Bournemouth started in determined fashion, Brooks playing in Danjuma, who beat Etheridge but saw his cross hacked off the line by San Jose.

They took the lead when Danjuma swept home his fourth goal of the season, picking out the far bottom corner from a tight angle after Junior Stanislas put him through on the left.

Jefferson Lerma then had two shots, the first, a side-footed effort, drawing a comfortable save from Etheridge and the second, a rising drive, flying over the bar.

Bournemouth continued to boss proceedings and Dominic Solanke’s close-range effort was deflected behind from Brooks’ cross before Dan Gosling – the Cherries’ only survivor from that 8-0 win – replaced Cook.

Gardner was in the thick of things and the midfielder headed wide at the far post from Riley McGree’s cross in a rare chance for Birmingham.

But Bournemouth went back on the attack and doubled their lead in the 42nd minute, albeit in fortuitous circumstances.

Brooks received a pass in the right-back position and held off McGree and then San Jose in a diagonal run across the pitch before his low, left-footed shot from 25 yards took a huge deflection off Marc Roberts, completely wrong-footing Etheridge.

Things got even better for Bournemouth five minutes into the second half.

Brooks made it 3-0 when he side-footed in off the bar after Solanke had hit a post when McGree dallied and lost possession.

Birmingham pulled one back shortly after when Hogan glanced home a free-kick from substitute Jeremie Bela.

Bournemouth twice tested Etheridge as they pushed for a fourth goal, Brooks and Solanke forcing him into routine saves from distance.

Only a superb sliding tackle by Roberts denied Gosling when he was clean through before Etheridge brilliantly tipped Lerma’s drive wide.

Tags: 1-3, Birmingham:, Bournemouth, Da
You may also like:
Recent Posts
This website uses cookies to improve your user experience and to provide you with advertisements that are relevant to your interests. By continuing to browse the site you are agreeing to our use of cookies.Ok