Report and highlights from the Championship clash between Brentford and Middlesbrough at the Brentford Community Stadium as they played out a relatively dour goalless draw on Saturday in west London.

Brentford and Middlesbrough stretched their unbeaten runs in an end-to-end goalless draw in the Championship.

The Bees made it four without defeat and Boro 10 in a game that always threatened but ultimately failed to upset the recent form guide.

Both sides had their chances but wayward finishing and two resolute defences meant a stalemate was the fairest outcome.

From the outset Boro, who have leaked just five league goals this season, looked a tough nut to crack for their hosts who are still struggling to hit the heights of last season. 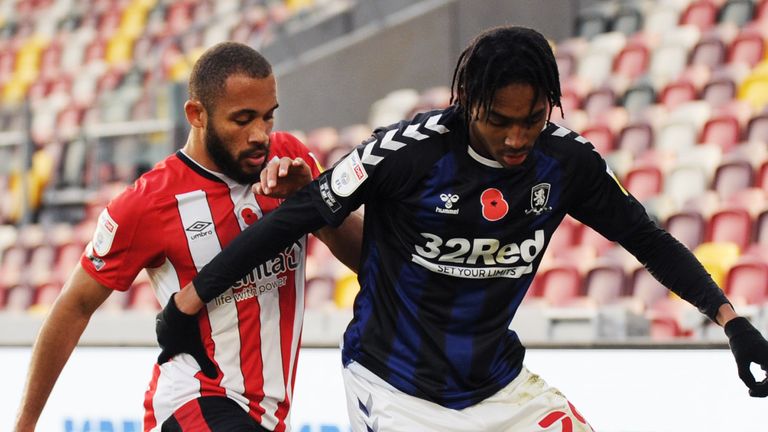 Vitaly Janelt squandered the best chance to seal the tightest of games for the west Londoners but skied his close-range effort well over with the goal gaping.

Brentford’s first sniff of goal came in the 12th minute when Henrik Dalsgaard refused to give up on a lost cause by the byline to slip in Sergi Canos, but the Spaniard couldn’t outmuscle his man to get a shot away.

The hosts failed to find any kind of rhythm in a stop-start first half against the high press from Neil Warnock’s side, whose best early efforts came from Marcus Tavernier free-kicks which sailed well over.

But it was Brentford who almost took the lead on the half-hour, Josh Dasilva bursting through the lines to fire a cross shot just past the far post with his weaker right foot.

Minutes later Canos forced a routine stop from Marcus Bettinelli with a speculative effort from the edge of the area as the game ebbed and flowed without ever threatening to burst into life.

Ten-goal top-scorer Ivan Toney’s persistence saw him power into the box just before the break, but the danger was averted by a superbly timed last-ditch Anfernee Dijksteel challenge.

Brentford started the brighter after the break but too often both sides saw any attacking intent blunted by over-fussy referee James Linington.

But when they did break Boro carried a threat and had a golden chance to take the lead after 54 minutes. Jonny Howson pounced on a sloppy Mathias Jensen pass to race clear and square for former Brentford loanee Chuba Akpom who turned his man only to blaze over.

Janelt’s chance to grab a debut winner came and went on the hour mark when Dalsgaard’s cross sat up nicely but he skied his close-range effort.

Marc Bola did well to get over a volley which came out of the sky from a headed clearance, but his strike fizzed just wide of the upright as the game opened up with 20 minutes to go.

Middlesbrough grew in belief in the dying stages and it was the Bees’ turn to defend, with Mads Bech Sorensen making a series of crucial blocks to keep the score deadlocked.

Lewis Wing thought he had won it for the visitors in added time, but his quick turn and snapshot from the tightest of angles was palmed over by David Raya.

Tags: 0-0, B, Brentford:, Middlesbrough
You may also like:
Recent Posts
This website uses cookies to improve your user experience and to provide you with advertisements that are relevant to your interests. By continuing to browse the site you are agreeing to our use of cookies.Ok