Report as Connor Goldson’s first league goals of the season give Rangers win at Celtic – who fail to register shot on target – and moves them four points clear at top of Scottish Premiership; Gers secure first back-to-back wins at Celtic Park since 1995 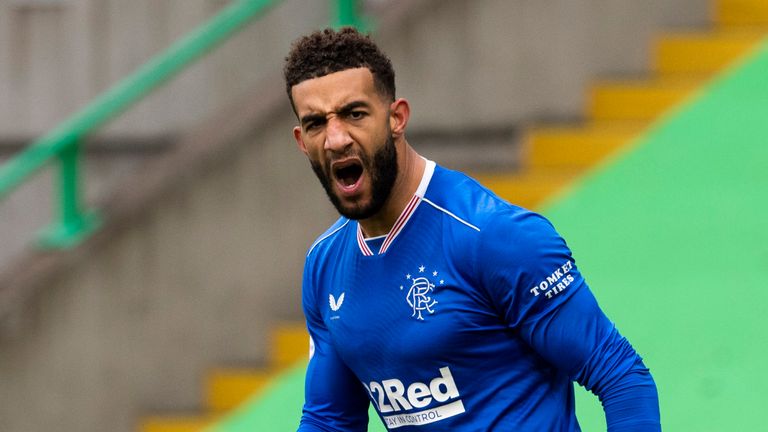 Goldson timed his run perfectly to glance James Tavernier’s ninth-minute free-kick beyond a hesitant Vasilis Barkas for an early opener as Rangers took control from the off, although Mohamed Elyounoussi should have levelled up minutes later after robbing the defender, but chipped well over Allan McGregor’s bar from 12 yards in one of few promising moments of quality from the hosts.

Goldson, who had only scored six Scottish Premiership goals in more than two seasons at Ibrox, then added a second nine minutes into the second period from an excellent one-touch move, turning home Scott Arfield’s low cross at the second attempt before aiming a kiss towards the television cameras in his celebration.

Ryan Kent was twice denied by Kristoffer Ajer as a dominant Rangers side looked to turn the screw on the Hoops, but, with Celtic unable to test McGregor across the entire 90 minutes, Steven Gerrard’s side had little to worry about as they moved four points clear in as routine an Old Firm win as they have enjoyed in many years.

Rangers must have sensed an opportunity to steal a march on their hosts ahead of kick-off with Celtic missing a number of first-team players and playing in front of an empty stadium. After surviving an early close shave when Elyounoussi was denied at close range by Filip Helander, they found themselves in front.

Tavernier’s excellent free-kick from deep on the right was met by Goldson, untracked after running back from an offside position, and his glancing header into the corner proved too much for Barkas’ limp attempt to keep it out.

Elyounoussi should have levelled shortly afterwards after robbing the goalscorer just outside his own box, but, with McGregor off his line, his chip beat the crossbar by a considerable distance. 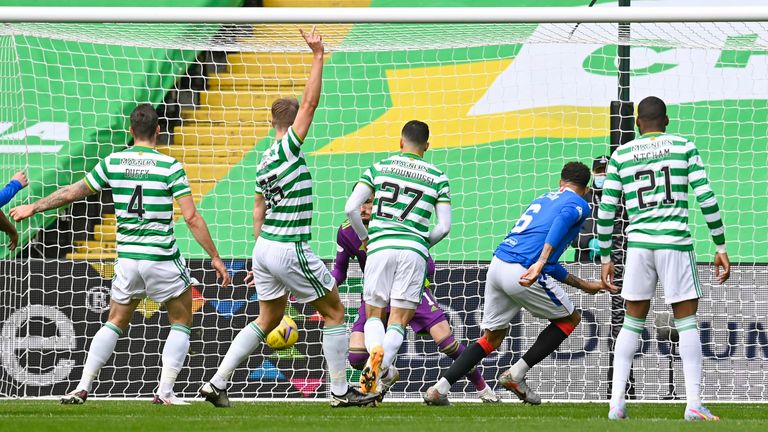 Kent had won the free-kick leading to the opener and continued to trouble the home defence throughout the opening period, but, aside from his 20-yard daisy-cutter, Rangers failed to test Barkas again before the break.

Celtic went in at half-time without registering a single shot on target, but could feel slightly aggrieved to see no action taken against Alfredo Morelos, who aimed a small slap on the ear of Scott Brown shortly before the interval, which appeared to go unseen by the match officials. 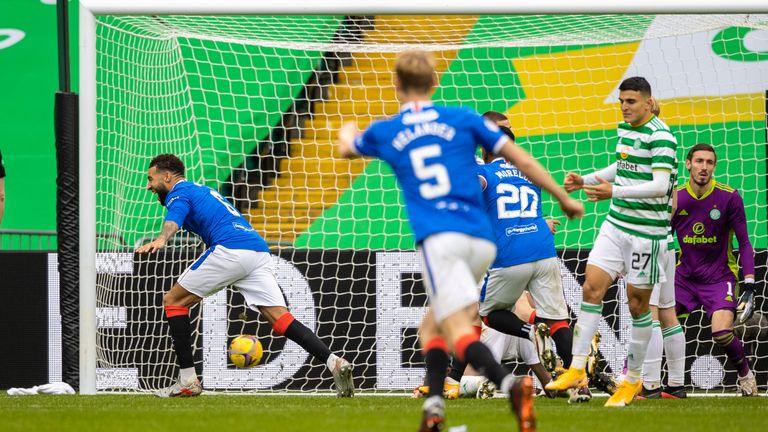 Nine minutes after the restart, Goldson – and Rangers – gave Celtic a lesson in finishing with the move of the game doubling the visitors’ lead. A one-touch build-up between Glen Kamara, Morelos and Arfield left the latter with space to cross low to the marauding defender, whose well-taken, first-time effort was kept out by Shane Duffy’s block – but his second attempt was buried beyond Barkas to give Rangers a valuable cushion.

Celtic continued to flounder in the final third with Rangers content to remain compact out of possession and, with Neil Lennon’s side forced to push men upfield, the hosts were nearly caught out again when Borna Barisic was played into space on the left, before crossing for Kent who was only denied a goal his performance merited by an excellent block from Ajer.

McGregor remained a relative passenger until the final 10 minutes when substitutes Alban Ajeti and Leigh Griffiths linked up for the latter to round the goalkeeper. Despite a heavy touch, Griffiths appeared to be caught but, after staying on his feet, he looked for his strike-partner instead of going for goal and was denied by the Rangers stopper. 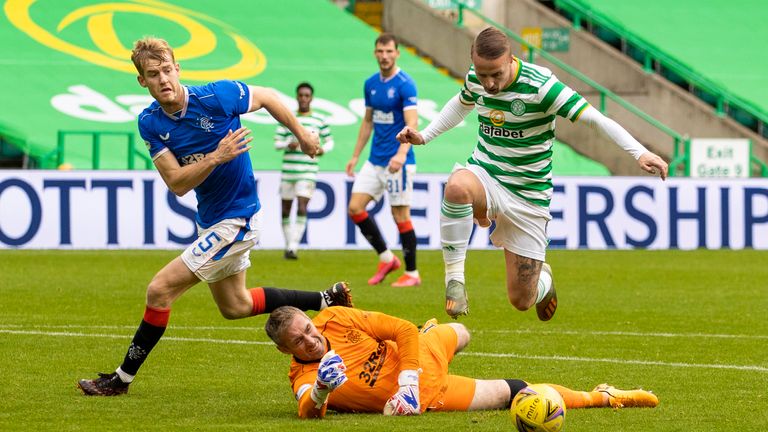 That and a Goldson block on an ambitious late Ajeti effort proved as tough as life would get for a Rangers side thoroughly deserving their three points against an out-of-sorts Celtic, who appeared to badly miss their absent first teamers, and are now off the pace of their title rivals even with their game in hand.

Celtic host Milan in their opening Europa League game on Thursday at 8pm, before visiting Aberdeen next Sunday in the Scottish Premiership, live on Sky Sports Football from 11am; Kick-off at midday.

Rangers also begin their Europa League campaign on Thursday, travelling to Standard Liege for a 5.55pm kick-off. They then host Livingston on Sunday at 3pm.