Declan Rice says England demonstrated their quality by beating Belgium on Sunday and has encouraged his team-mates to maintain their “mentality” ahead of Wednesday’s visit of Denmark.

England came from behind at Wembley to defeat Roberto Martinez’s side, who are ranked No 1 in the world by FIFA.

The victory moved them to the top of Nations League Group A2, a position they can strengthen if they beat Denmark, with whom they drew 0-0 in Copenhagen last month.

Asked if England laid down a marker by defeating Belgium, Rice said: “Yeah, definitely. Look, we knew before the game that they’re the No 1 team in the world and that’s where we’re aiming to be.

“When you’re at international level, you want to test yourself against the best. They had world-class players all over the pitch and obviously a couple missing, but it was a great test.

“Right towards the end we were digging in deep. They were putting the pressure on but we stood firm, stood tall and at times we played some great stuff, obviously scored two goals. To beat them, the lads are delighted.

“This is the mentality we need to get ourselves into heading into tournaments because there’s going to be games where we will be pinned back, where we need to show the grit, desire to come out on top and give 110 per cent every time.”

Southgate: We must back up Belgium win

Gareth Southgate has echoed Rice’s comments by encouraging his players to follow up their win over Belgium with another positive result against Denmark. 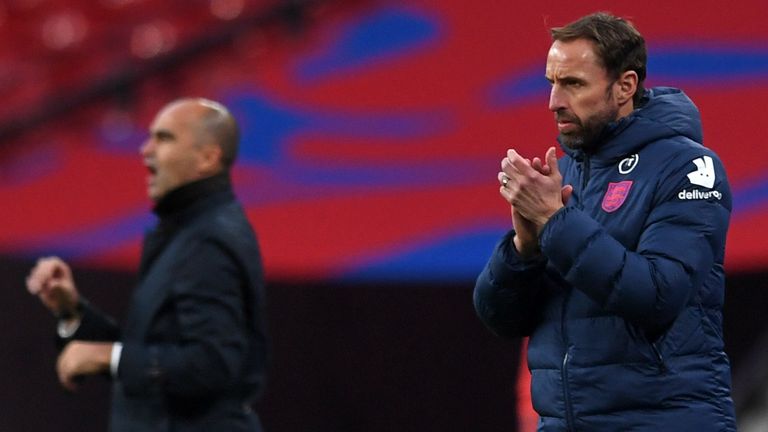 Southgate believes England are unlikely to face many sides as accomplished as Martinez’s, saying: “The quality of the opponent, from the back players and their use of the ball, the angles, the movement and the one-twos… we are not going to face a more complicated game defensively, I think.

“You will face different sorts of challenges – counter-attacks, speed, power – but they have got a bit of everything in their ranks, and in Kevin De Bruyne, they have such a special player.

“I just think for us it was a brilliant test, the sort of test we need. That is the beauty of the Nations League; you get a game against the highest-level opponent.

“Mentally and physically, that would have taken an enormous amount of out us and we are now in a situation, a bit like in a tournament, where we have to back that up on Wednesday.”