Bristol City’s chief executive Mark Ashton has questioned the logic of banning football fans from stadiums as cinemas and theatres re-open and urged the Government to urgently reconsider.

It came as hundreds of City supporters were welcomed into Ashton Gate’s bars and hospitality suites for Saturday’s Championship fixture with Swansea but had to watch the game on television screens.

A handful of pilot events were staged in the EFL in September with 1,000 socially-distanced fans permitted inside the stadiums. 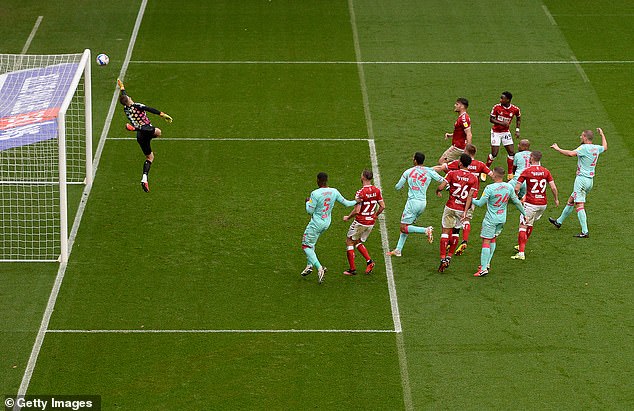 Although the events passed off safely, a rise in coronavirus cases nationally led to fans being locked out again, potentially until March next year.

Ashton, who serves on the EFL Board, stressed the unanimous message from clubs is that it is completely safe to allow fans back into grounds in limited numbers and it needs to happen now to save some from financial oblivion.

‘We fully understand the challenges the Government are facing but there is no logic right now that we can see to not allow limited numbers of fans,’ he said.

‘It is crazy that cinemas are open, theatres are open, bars are open, restaurants are open. You can sit in a cinema and watch Premier League football but you can’t sit in a bowl outside and socially distance.

‘That is where the Government need to review this and review it quickly because not only are they hurting supporters but they are damaging clubs irreparably by now allowing fans in.

‘The 72 EFL clubs want to work with Government but we need to bring the Government to the point where they understand we can do this. We can’t wait until January, we need to do this now.’

In the Lansdown restaurant at Ashton Gate about 100 supporters at socially-distanced tables and with table service enjoyed a pre-match meal and drinks before watching the match live on big screens.

In another corner of the stadium a similar number in the sports bar enjoyed beer, cider and pizza as they watched the action unfold on a giant screen.

But while ordinarily they would be able to climb a set of stairs and pass through the doors to take their seats inside the stadium, all views of the pitch just a few metres away were blacked out.

Using the NHS Covid-19 app and by arranging the tables into zones in the room, club officials could quickly identify anyone who may have been exposed to the virus if the need arose.

There was a similar arrangement at The Den yesterday as Millwall played Barnsley with supporters able to watch the game on screens in hospitality areas but not look through windows at the pitch. Norwich, Middlesbrough and Brentford also have plans to welcome fans into screenings of their matches in hospitality rooms in their stadiums.

In League One, Hull City allowed fans into the Kingston Suite at the KCOM Stadium for their top-of-the-table clash with Peterborough United.

The tables made available to season-ticket holders at Bristol sold out within minutes and Ashton says fans just wanted to remind themselves of their matchday rituals even if they couldn’t take up their normal seats.

‘We are competitors on the pitch but among the 72 EFL clubs there is a unity like I’ve never seen before,’ Ashton added.

‘They are absolutely clear. We want to work with the Government. We worked with them to bring the game back safely at the end of last season and we as an industry delivered.

‘We will follow the safely guidelines and we need to be monitored to do that. But we are good to go.’

Ashton Gate’s managing director Mark Kelly said the club has drawn up plans to allow 8,980 fans to safely attend matches, including detailed procedures to get in and out of the stadium.

‘My frustration is that the Government is not talking to us,’ said Kelly. ‘The last thing we want is to bring a spike in infections to Bristol. If it isn’t completely safe, it will backfire on us.

‘The message is: talk to us, use our years of experience in safety management, and get us involved collectively to try to create a roadmap to get the fans back.’