Liverpool take on title rivals Manchester City at the Etihad on Sunday afternoon in a contest that may ultimately come down to a battle between the Premier League champions’ uncharacteristically porous defence and the home side’s star-studded attack.

Jurgen Klopp’s side may have had the meanest defence in the top flight for the past two campaigns – conceding just 22 and 33 goals in 2018-19 and 2019-20 respectively – but that rock-solid back-line has evaporated this season.

Liverpool have worrying let in 15 goals in their seven Premier League games this campaign, as many as they shipped in their first 26 top-flight matches last term. Indeed, it’s the most the Reds have conceded seven games into a league campaign since 1964-65, while only newly-promoted West Brom have let in more so far this season.

With star man Virgil van Dijk missing from the visitors’ back-line this weekend for their toughest examination of the campaign, City must be fancying their chances of closing the gap on the leaders given both the potency of their forward line and their seemingly settled defence.

And with City having won their last three home league games against Liverpool by an aggregate score of 11-1, the omens look good for Pep Guardiola’s team.

So can Liverpool’s ever-changing back four – Klopp used his 36th different centre-back partnership in Tuesday’s 5-0 Champions League win at Atalanta – step up and blunt their hosts’ pacy attack?

Have the tables turned?

Liverpool epitomised defensive solidity for the majority of last season – at least up until lockdown, when the title was effectively secured – while City struggled to maintain their customary watertight ways.

As the graphic below reveals, Van Dijk started every single league fixture at centre back and Joe Gomez started more than half of the games – with Dejan Lovren and Joel Matip each starting around one in five matches.

But City were rocked by Aymeric Laporte’s long-term injury, forced to rotate and test numerous partnerships in the Frenchman’s absence – in fact, defensive midfielder Fernandinho was the most regular starter in the centre of defence.

Fast forward to this campaign and there is far less consistency. The graphic below suggests Liverpool are once again the most consistent – but Van Dijk has been potentially ruled out for the remainder of this season.

Similar to how Fernandinho stepped in for Laporte at City last term, Fabinho is now the Reds’ second most regular starter at the back from available players – although the makeshift defender misses out this weekend with injury – with Matip and Nat Phillips also featuring.

For City, consistency appears to be emerging, with Ruben Dias settling in seamlessly since his summer switch from Benfica, while Laporte now his regular partner at the back – with fellow new boy Nathan Ake, Eric Garcia and John Stones all in reserve.

So, defensively, Liverpool now face the same struggles City did last season: a long spell without their key lynchpin at the back and a period of experimentation to rekindle solidity.

But Liverpool’s defensive frailties and risky high line were exposed before Van Dijk was injured, particularly after the 7-2 defeat against Aston Villa – which has led to a skewed season average of 2.1 goals conceded per game.

Leeds and Aston Villa both targeted attacks down Liverpool’s right flank – namely against Trent Alexander-Arnold and Gomez – and the majority of the Reds’ goals conceded this term have come from areas marshalled by that pair. 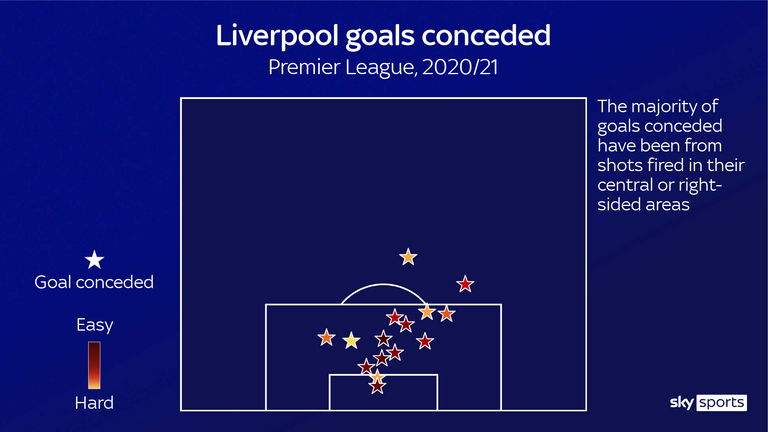 Both managers have a number of dilemmas regarding their starting line-ups at the Etihad.

Guardiola must decide who starts at left-back, Joao Cancelo or Oleksandr Zinchenko, with Benjamin Mendy currently injured, and who partners Kevin De Bruyne and Rodri in a three-man midfield?

And does the City boss go with the now fit-again Gabriel Jesus in attack, or the same front three who featured against Olympiakos and Sheffield United in their previous two games – Riyad Mahrez, Raheem Sterling and Ferran Torres?

As for Liverpool, Klopp’s main questions revolve around the identity of Gomez’s centre-back partner, with Matip now available after a recent muscle problem, although both Phillips and Rhys Williams impressed in the role in the club’s last two matches.

“I think he’ll go with Matip, the big-game experience, and he wasn’t shy in putting him straight in against Everton, as well, another tough game for Liverpool away from home,” said the Sky Sports pundit.

“The only thing is fitness and playing games, but I don’t think that’s ever really been a problem for Matip because he’s injured so often he’s always in that position where he’s coming back without having had the full training programme or games under his belt or a pre-season because he is very injury prone.

“I actually think Matip has possibly been ready for the last game or two and the manager has almost kept him in reserve for the City game and making sure he’s got two recognised senior centre-backs for that City game. I fully expect Matip to play in this game.”

The Liverpool manager also faces a tricky call up front given Roberto Firmino’s recent struggles in that position, in stark contrast to the electric form shown by Diogo Jota since his arrival at Anfield last summer.

Carragher, though, believes the Brazilian will get the nod, just.

“Jota’s form warrants a start, you can’t argue about that, but I just think the manager will go back to Firmino, the way they’ve set up before,” said the ex-Liverpool captain.

“I think Firmino this season, he’s not been at his best, there’s no doubt. I don’t think he was at his best last season. But they’ve always performed in the big games – Everton, Arsenal, Chelsea. That’s when teams play out from the back and that’s when Bobby Firmino is a huge part of that press and winning the ball back and almost not letting teams get out of their own half.

“That was certainly the case in those three games I mentioned, those teams really struggled to get through the press of Liverpool.

“I think Jurgen Klopp will know that Man City want to play out from the back and he’ll go with his pressing machine. There’s no doubt Jota can do this as well, ‘he’s a pressing monster’, that was the description of him from Pep Lijnders, Jurgen Klopp’s assistant, so there’s no worries about him on that score.

“But I just think for this game and the type of game it will be and the fact that Bobby has played so many games against Man City and Liverpool have had success in those games, I just think he’ll go back to that.”

Jurgen Klopp dismissed the idea of a two-horse race for the Premier League, insisting Liverpool and City have no divine right to compete for the title because of previous success.

Asked if it was more of a two-horse Premier League title race this season, Klopp told Soccer Saturday: “Yes, it always was. Until a specific point, it was last year for a very long time at least a three-horse race, that’s clear. I’m not surprised about that.

“Nothing is guaranteed, could anybody have imagined that the virus could stop the whole world in pretty much a week and that it would do that for eight or nine months? Football is no different, you can take nothing for granted.

“I don’t think about us one of two teams, I think about as a team that has to do a lot of things right to be successful, and then we will see where it leads up to.

“I’m not interested what people think about us in the sense if we are one of the top two or the only one, or one of three or four, that’s not important when you prepare a game. That’s the job I have to do, I have to prepare my team for football games and the next one is a tough one.

“If we look back at the previous two years, they were impressive for both teams. City won one [Premier League] and we won. We won the Champions League on top of that, City won the FA Cup.

“That doesn’t mean this year we have the ticket to do it again, everybody has a chance. That’s why I said we don’t defend anything, we attack the next one, with all we have, whatever that means in a specific moment.”

A monster of a football match.

I just hope we get a cleanly run affair in order to gauge a true understanding of what levels these two teams are operating at. For the last two campaigns, these two have been streets ahead of the rest. Is that still the case? Are these two still the standard-bearers for the Premier League?

I would say Liverpool certainly are. Barring the anomaly at Aston Villa, they have put in some excellent performances with their full-backs, central midfield and deadly front three still the best in the business.

However, I am yet to be convinced that City are the same beast though. I would say they are massively vulnerable this season for a top-two finish.

This has been the worst start after six league games in Guardiola’s 12-season senior managerial career. His City side have won fewer games, scored fewer goals and conceded more goals than in any of his previous seasons in charge of Barcelona, Bayern Munich and City.

At this stage of last season, City had already scored 24 goals, they have just nine this time around. The intensity without the ball has also looks toned down, something that you cannot accuse Liverpool of.

I think this is a bigger game for City than it is for Liverpool in that regard. They have more questions to answer. More points to prove.

A defeat would leave them nine points adrift of Jurgen Klopp’s team. Even at this stage, that is a huge gap to chase down. All those factors make Liverpool a very tempting proposition at 12/5 for an away win. It is not often you can get prices of such juice about a team than ran away with the title just a few months ago and remain consistently operating to the same performance level.

What the experts say…

Carragher: Title race still between City and Liverpool
Jamie Carragher joined the Pitch to Post Preview Podcast to analyse Man City vs Liverpool, assess each side, and give his verdict on the title race.

Dunne: City vs Liverpool almost a title decider
Former City captain Richard Dunne says Sunday’s match against Liverpool is “massive” and expects it to have a significant impact on the Premier League title race. 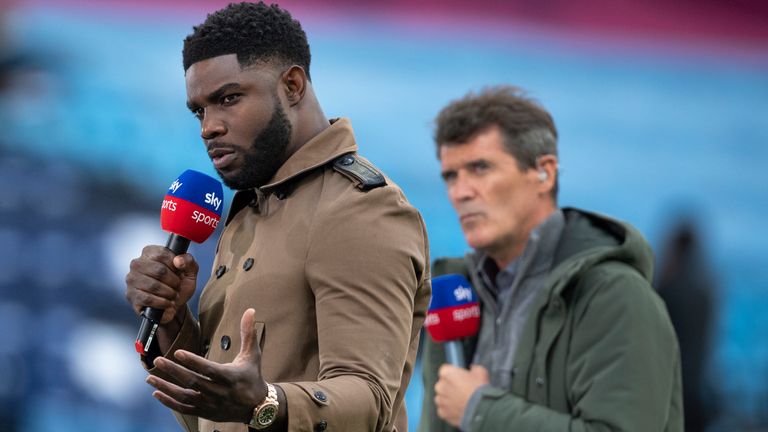 City vs Liverpool will be broadcast live on Sky Sports Premier League from 4pm on Super Sunday; kick-off at 4.30pm. Sky Sports customers can watch in-game clips in the live match blog on the Sky Sports website and app. Highlights will also be published on the Sky Sports digital platforms and the Sky Sports Football YouTube channel shortly after the final whistle.