Ian Baraclough has urged his Northern Ireland players to go out and make history in Thursday’s Euro 2020 qualifying play-off final against Slovakia.

Northern Ireland have the chance to build on the success of five years ago, when they reached Euro 2016 to end a 30-year wait for a trip to a major championships, and start the night in the unfamiliar position of favourites after a turbulent few weeks for the visitors.

“It’s something I always try to remind players: go and try to create history, whether that’s at club level or with the (under) 21s or now with the seniors,” Baraclough said. “By winning certain games, you put yourself in that position.

“It’s for other people to judge but we know that to get to the Euros would be an unbelievable achievement for this group of players who started this two years ago.” 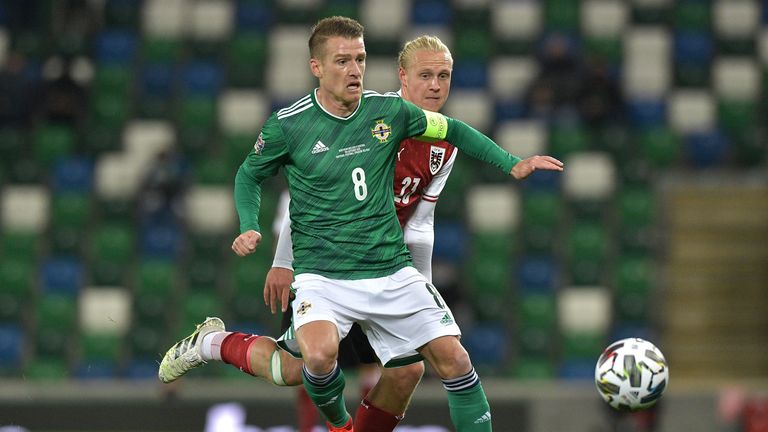 Captain Steven Davis scored twice on that famous night when Northern Ireland beat Greece 3-1 at Windsor Park to book their ticket to Euro 2016, and the Rangers midfielder now wants to write another chapter.

“It was a memorable night for all of us involved, a special night,” he said. “It’s very hard to compare success, ultimately the most important one is the one at the time.

“But maybe that’s something when you finish your career, you can look back on. We all want to play on that stage again.

“We know how special it was for the ones involved and the ones who weren’t involved want to experience that. We’ve spoken many times about how much we enjoyed being in France. It’s left us wanting more and we will go out tomorrow night determined to do it again.”

But while the Greece match provides a positive blueprint for Thursday, Northern Ireland also have more painful memories of missing out on the 2018 World Cup, when their two-legged play-off against Switzerland was ultimately settled by a disputed penalty in the first leg in Belfast.

“That was a very sore one to take,” Davis added.” It was a little bit different in that it was over two legs and how we approached the first one. This game being all or nothing on that night will hopefully suit us in terms of that.

“It’s difficult to look back, not go to a World Cup on the back of that decision was very difficult to take. VAR is going to be involved in this game, so that’s a positive for us.”

“Once they come into camp, they’re amongst friends, amongst mates,” he said. “They love joining up as a group and if anyone has got a problem or got a personal issue, they know there are people they can turn to and it’s been great in that respect for the lads coming in.”

Tags: Bara, boss, Ian, Ireland, Northern
You may also like:
Recent Posts
This website uses cookies to improve your user experience and to provide you with advertisements that are relevant to your interests. By continuing to browse the site you are agreeing to our use of cookies.Ok