Norwich made it two wins in the space of four days as an 87th-minute strike from substitute Mario Vrancic earned them a hard-fought 1-0 victory over 10-man Birmingham at Carrow Road.

It all went wrong for Aitor Karanka’s side as Adam Clayton’s red card for a second bookable offence was followed almost immediately by a well-taken winner from the Bosnian midfielder.

Norwich were able to celebrate a first home win since beating Leicester in the Premier League by the same score back in February – while it was the first time they had won back-to-back league games since the final two fixtures of the 2018/19 campaign.

For Birmingham it was a second successive 1-0 defeat – and they could have few complaints after a defensive display which produced few clear-cut openings. 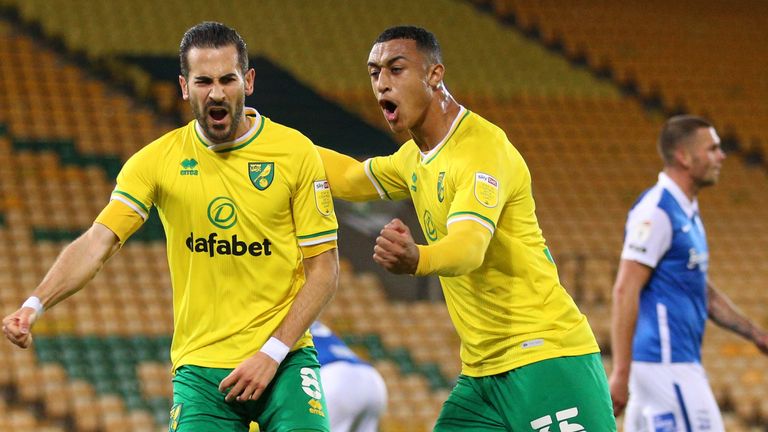 Buoyed by a battling 2-1 win at Rotherham on Saturday, the Canaries started at a high tempo, pinning the visitors back with some crisp passing.

However, they were unable to translate impressive build-up play into clear-cut chances in the early stages, with Lucas Rupp’s 25-yarder which went straight at goalkeeper Neil Etheridge the only effort of note in the opening quarter.

Birmingham were happy enough to soak up the pressure and rely on the occasional break, with loan striker Scott Hogan an isolated figure up front.

Norwich had talented midfielder Todd Cantwell back in the starting line-up after a big-money move failed to materialise before the transfer deadline and as the hosts continued to press he wasted two excellent chances to break the deadlock.

With seven minutes of the half remaining, he sent a low volley just wide after being set up inside the area by an astute pass from Teemu Pukki and a couple of minutes later an even better chance went begging.

This time the youngster robbed Jonathan Leko on the edge of the area and bore down on goal, only to be thwarted by the outstretched left leg of Etheridge.

The suddenly overworked keeper then had to palm away a dangerous cross from Pukki before, at the other end, Birmingham finally had a decent shot on goal as Ivan Sanchez’s effort from just outside the box was deflected over.

There was a similar pattern of play at the start of the second half, with Norwich having most of the ball and Jordan Hugill quickly sent a fierce drive high and wide after a neat build-up.

Good interplay between Hugill and Pukki then ended with the Finn testing Etheridge again from a tight angle.

As the game passed the hour mark the Blues had a sight of goal when Emi Buendia surrendered possession, with substitute Jeremie Bela shooting straight at Tim Krul – but it was the Canaries who were dominating proceedings.

Cantwell had an effort rightly ruled out for offside before side-footing Xavi Quintilla’s low cross wide and then seeing his close-range shot from a Max Aarons cross brilliantly blocked by Maxime Colin.

Norwich manager Daniel Farke directed an angry tirade in the direction of referee Oliver Langford as the home frustration grew, angered by a number of decisions that had gone against his team.

Birmingham were reduced to 10 men after 86 minutes when Clayton received a second yellow card for a late challenge on Cantwell and seconds later the Canaries were deservedly in front.

The visitors lost possession when bringing the ball out of defence and when a quick ball forward from Buendia found Adam Idah, fellow substitute Vrancic took the ball off his colleague’s feet to drill the ball low and hard past Etheridge.