Report and highlights from the Sky Bet Championship clash at Hillsborough

The hosts were reduced to 10 men when Joost Van Aken was shown a straight red card in the 71st minute and three minutes later Mpanzu fired in the winner. 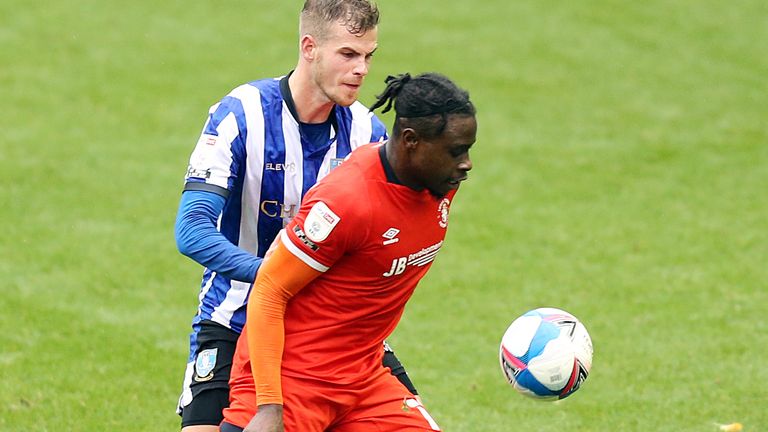 Luton’s starting line-up included Kiernan Dewsbury-Hall, who was making his debut after signing on loan from Leicester.

The visitors had a great chance to score inside the opening 20 seconds when Danny Hylton rounded keeper Cameron Dawson and fired in a shot which Aden Flint did well to block on the line.

Tom Lockyer shot narrowly wide of Dawson’s left-hand post when a loose ball fell to him following a free-kick.

Mpanzu spurned a golden opportunity for the visitors midway through the half, firing wide after being put through on goal following a great ball from Elliot Lee.

Soon after the restart, Flint’s ball into the area was glanced on by Van Aken but Luton goalkeeper Simon Sluga was equal to it, gathering the ball at the second attempt.

After Mpanzu was fouled just outside the area, Lee put the resulting free-kick over the bar.

There was a change for Wednesday in the 64th minute when Windass replaced Callum Paterson, and soon afterwards Bannan fired in a shot from around 20 yards which was deflected wide.

Luton boss Nathan Jones made a substitution in the 69th minute, sending on Kazenga LuaLua in place of Lee.

The home side lost Van Aken in the 71st minute when the defender was shown a red card following a high challenge on Mpanzu.

Mpanzu then struck what would prove to be the only goal of the game in the 74th minute, firing a low shot past Dawson from inside the area.

Wednesday substitute Jordan Rhodes failed to make a proper connection at the far post after getting on the end of an Adam Reach cross as the Owls sought to reply.

Kadeem Harris went down under a challenge from Martin Crainie inside the area late on, but Wednesday’s penalty appeals were in vain.

The home side applied some late pressure in a bid to force an equaliser but they never seriously threatened Sluga’s goal.

Luton were content to see the game out and they went close to scoring a second in stoppage time when substitute Ryan Tunnicliffe fired in a low shot which came back off Dawson’s left-hand post.