Andrew Redmayne will not travel with the rest of his Sydney FC teammates to Qatar next week for the AFC Champions League after the club gave the Socceroos goalkeeper permission to stay behind and be with his pregnant wife.

The Sky Blues, Melbourne Victory and Perth Glory have reluctantly accepted they have no choice but to fly out to Doha next week or face a massive fine from the AFC and a two-year ban from the tournament if they refuse. 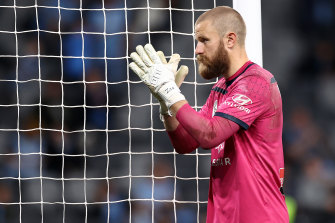 But while players and coaches from all three teams have huge reservations about health and safety in Doha – as well as the prospect of another round of quarantine when they return, which could severely impact their preparations for the new season and even keep them apart from their families at Christmas – Redmayne has an extra layer of concern.

His wife, Caitlin, is due to give birth to their first child on January 17. The Sky Blues will be well and truly out of quarantine by then – even if they made the ACL final on December 19 – but the 31-year-old said he could not risk being away from her if something was to go wrong, in Sydney or in Doha.

"If everything went as to plan and as expected, I would be back in time for the birth," Redmayne told the Herald.

"But no pregnancy ever runs exactly to plan. And the way the world is at the moment, with international travel, there is margin for error there … there was a chance I could miss the birth of my first child and that's something I wasn't willing to risk."

The situation hit close to home for Redmayne because his teammate Michael Zullo's wife, Georgia, recently gave birth to twins at 36 weeks.

"So if we came a month early, I'd miss it – I'd still be in quarantine. And that's without progressing in the Champions League," he said.

"It was a hard decision and something I thought I'd feel kind of relieved [about] after making the decision, and being allowed to stay behind. But I still feel a bit uptight and apprehensive about it all.

"As much as I hate having to let the boys go by themselves and not being there to help them and support them, I've got to do the right thing by my family. It's the first time in my life I've put football second, and there's no greater time to do it, based on what everyone tells you about having your first child."

Redmayne said his teammates were determined to perform strongly in the Champions League, a trophy he said would be the "cherry on top" of a recent spell of dominance by Sydney FC in the A-League, during which they have won six of the last eight major pieces of silverware.

But he also said there was real unease within the squad about playing in Qatar – which has been the nation in the Middle East worst hit by the pandemic, and where two teams from the ACL's west zone experienced COVID-19 outbreaks during their matches in September.

"I wouldn't say it's in the back of their minds – it's probably in the middle," Redmayne said.

"It's something there is a bit of apprehension about within the squad but the club's said they're going and the boys are willing to toe the line on that and go over there to compete."

Redmayne will train with Sydney's youth team and goalkeeping guru John Crawley to continue preparing for the new A-League season, while understudy Tom Heward-Belle is expected to step up in the ACL in his absence.

Meanwhile, fears that the four Chinese clubs in the ACL – including Sydney FC's Group H opponents, Shanghai SIPG – would be unable to take part have been allayed. The Chinese teams were given exemptions by their government to travel to Qatar over the weekend, according to sources.

Sydney, Victory and Perth are still awaiting their final exemptions from the Australian government, enabling them to book flights and make arrangements for quarantine when they get back. However, Sydney FC chief executive Danny Townsend said he expected those to come through early this week.

The Sky Blues will face Graham Arnold's Olyroos in a friendly at Netstrata Jubilee Stadium on Thursday night before their likely departure for Doha on Saturday.

Tags: 'Something, I, to, wasn't, willing
You may also like:
Recent Posts
This website uses cookies to improve your user experience and to provide you with advertisements that are relevant to your interests. By continuing to browse the site you are agreeing to our use of cookies.Ok