NSW claimed one of the most remarkable victories in the state's 164-year history as Test stars Mitchell Starc and Nathan Lyon signed off on Shield hub life in style on Wednesday.

Just days after being fired out for 64, the defending Sheffield Shield champions came back from a seemingly hopeless position to defeat Tasmania by 145 runs in Adelaide. 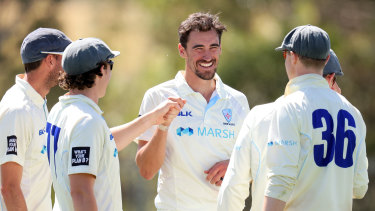 Mitchell Starc and the Blues celebrate a a wicket against Tasmania.Credit:Getty

Starc finished off the match by trapping captain Tim Paine in front with a late inswinger, which may have been doing too much to hit leg stump.

Though wicketless on the final day, Sean Abbott set up the come-from-behind win with four victims in the first innings before batting the Tasmanians out of the game with his maiden first-class century.

South Australia veteran Callum Ferguson came tantalisingly close to bowing out with a century, dismissed for 97 as the Redbacks lost by 62 runs against Queensland as they attempted to give their departing stalwart a fairytale finish.

Queensland leg-spinner Mitchell Swepson could not break through until deep into the day, but his late strikes were decisive in the Bulls' push for victory.