When Justin Langer saw Cameron Green send down his first spell in the Sheffield Shield, he was so impressed by how well the West Australian prodigy bowled he thought it not probable it could not be his primary discipline.

So when then selector Greg Chappell insisted Green was one of the brightest young talents he had seen with the bat, Langer could be forgiven for being sceptical. 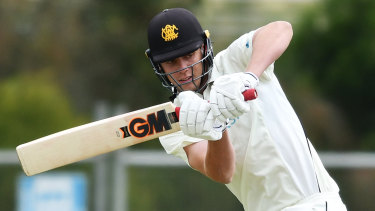 "I know George Bailey's really big on this as one of our new selectors, he bats time, and in Test cricket generally the rule is, Allan Border used to say, "there's a lot more time than you think, young fella"," Langer said.

Selectors have been criticised for picking on potential over performance. In Green, they have a 21-year-old of considerable talent putting runs on the board.

Averaging 50 with the bat and 21 with the ball, Green has the numbers of a bona fide all-rounder.

"I texted Greg Chappell a couple days ago and I said "GC, wasn't it me that was telling you what a great batsman Cameron Green was" and I had a whole lot of smiley emojis, because Greg Chappell's been telling me for two years 'Cameron Green is brilliant, he is the best young batting talent'," Langer said.

"And I said 'mate, he's six foot seven, I saw him bowl to George Bailey in his first over and he'll never bowl a better over in his whole career than he did'.

"When I first saw him bowl I thought his action was like a young Shaun Pollock, because it was just so simple, but then he grew a lot.

"I know he's working hard on his action to ensure he stays healthy, but if Greg Chappell's telling me he's the best young talent he's seen for a long time, and I've seen how he bowls, he's potentially in the future a great all-round package.

"At the moment his batting speaks for itself and he's bowling a few overs. But it'll be a pretty good package won't it if he stays fit and healthy."

Meanwhile, run machine Marnus Labuschagne sent another warning to India, amassing his second ton in as many games for Queensland against a Blues attack featuring Test stars Mitchell Starc and Nathan Lyon. He was eventually dismissed for 117.

Starc claimed the wicket of former Test opener Matthew Renshaw while Lyon was wicketless. The Bulls were 7-274 at stumps.

Test incumbent Travis Head made just nine for South Australia before Victoria seamer Will Sutherland squared him up and had him caught behind, Sutherland's first in an impressive return of 3-26 from 16 overs. Victoria finished at 0-38 after dismissing South Australia for just 200 on the opening day.